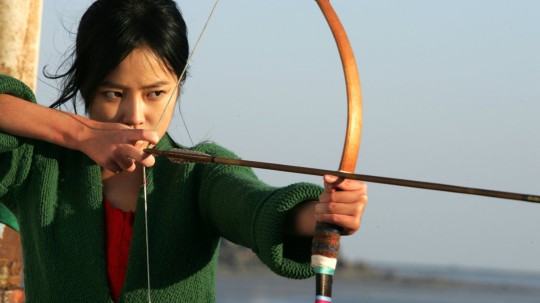 A sixty year old fisherman (Jeon Seong-hwang) lives on a boat in the middle of the ocean with an almost seventeen year old girl (Han Yeo-reum). The old man has been raising her for ten years. She has never left the boat ever since he found her. The old man plans to marry her on her seventeenth birthday, which is only a couple months away. Everything seems to be going well for them. They make a living by renting out their boat to fishermen and telling their fortune in a rather risky ritual that involves a bow. As a matter of fact this bow turns out to be a very useful tool and not just to for fortune-telling, but also as a musical instrument and to deter pervy fishermen to touch the girl. One day it all changes. Harmony is broken. A young student (Soo Si-jeok) steps aboard and steals the lovely girl’s heart. Consumed by jealousy the old man tries to anticipate the wedding to avoid losing the girl. Destiny however has something else in store for them.

Hwal (literally bow) is considered Kim Ki-duk‘s most accessible film. Some have speculated that it was his attempt to get nominated and maybe win an Oscar. Regardless of all this cynicism I still can’t help but love every second of this movie. It’s not just the Lolita aspect, but also a mix of weirdly perverse, yet romantic notions that make me emotional every time I watch The Bow. Naturally, it helps that “the girl” (we’re not really allowed to know anyone’s name in this film), Han Yeo-reum is incredibly beautiful. Aside from such superficial considerations, which impact anyone’s viewing regardless of what they’ll say, I appreciate this film on a screenwriting level. Kim’s ability lies in the fact that he’s able to make a screenplay and characters come to life without the need for any dialogue. Both leads of this film never speak one single word and yet you feel so deeply for them. They become real people. They’re not even characters anymore. It’s beyond words. Literally.

Kim Ki-duk’s approach to filmmaking is intuitive and instinctive, which has always worked for him so far. I definitely feel his movies. I might not remember the story or what their about, but the emotion and impact they make on me is indelible. While the Korean auteur himself stated that his films are poetry in a certain way (especially the endings) and that he’s less interested in the visual aspects of cinema than he is in the message: I think The Bow is absolutely stunning. Even when there’s not much going on plot-wise, I can’t help but being entranced by the beautiful colors and images. As I was saying the ending is a bit cryptic and might turn some viewers off, but I found it to be very touching. At least the way I interpret it. That’s what I love about open-ended films, you can attach your own personal interpretation to it and not even the director will be able to tell you that you’re wrong. In fact he probably wants you to think about the film and decide what it means to you.

As I’ve mentioned the actors (and especially actress) are very beautiful or at the very least easy on the eyes. Once again though Kim Ki-duk proves to be an excellent actors’ directors who’s able to elicit the best possible performances out of his carefully selected cast. It is especially impressive since the actors don’t talk much or at all. The lack of dialogue however never makes the film boring or tedious, on the contrary: He’s able to create a magnetic pull, an unspoken magical aura that draws you into the film. Not many directors posses this unique ability to make you part of the experience. The result is a much more powerful and meaningful relation to the movie. Much like with filmmakers that use a shoegaze soundtrack, Kim’s musical choices, help creating a wholly engrossing sensation. I didn’t even know that you could use a bow as a musical instrument, but apparently you can and it makes such a distinctive and unique sound it’s quite spiritual actually.

Overall, I must admit that I’ll never be sure if I can or will understand a Kim Ki-duk film completely. Some of it has to do with my limited knowledge of Korean culture, some of it is that he purposely chooses to be cryptic (but for good reason). Either way I don’t care as long as he’s able to transmit such genuine and heartfelt emotions. Many moviegoers see Kim Ki-duk as a “extreme” filmmaker, however in movies such as this one and Spring, Summer, Fall, Winter… and Spring he proves that he can direct a quiet film, with no violence and make it just as good (if not even better). Unfortunately, since The Bow wasn’t the critical and commercial success that he probably hoped for he’s back to some more gruesome themes. Not that I dislike or disapprove of his more heavy stuff, au contraire, it’s just that I always appreciate it when a filmmaker expands and experiments out of their comfort zone. The Bow is definitely something different for Kim Ki-duk, but in the best possible way.