Werner Herzog bets fellow filmmaker Errol Morris that he won’t be able to complete his debut feature Gates of Heaven (1978). Herzog is so convinced that Morris won’t be able to finance and release the documentary about pet cemetery business that he’s willing to eat his shoe, if his friend should succeed. Morris does indeed succeed, but will Herzog live up to his promise? You better believe it. After boiling his boots for 5 hours with a little garlic,herbs, stock, salt and hot sauce – Guten Appetit!  END_OF_DOCUMENT_TOKEN_TO_BE_REPLACED 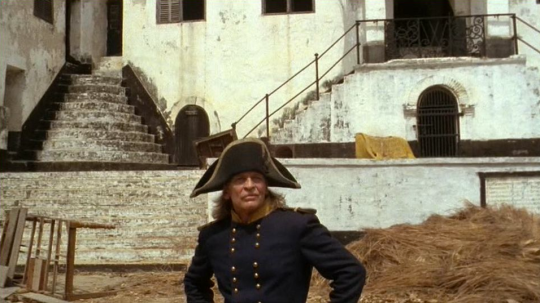 Kaspar Hauser (Bruno S.) has lived imprisoned in a cellar for all his life. He can’t walk, he can’t talk and he has had no contact with any human being. One day whoever is doing this to him decides to free him. He teaches Kaspar how to write his name, a few words and how to stand on his feet. The people of Nuremberg (Germany) find him standing in the middle of their town. A family decides to take him in. They try to teach him everything they think is important, but Kaspar’s existence remains a mystery.  END_OF_DOCUMENT_TOKEN_TO_BE_REPLACED

One of my favorite actors, Willem Dafoe, is showing up in some great movies this year. You can see him in Wes Anderson’s The Grand Budapest Hotel and Lars von Trier’s Nymphomaniac: Vol. II. He has worked with some of my very favorite directors and has the most unique and iconic face. Nobody looks quite like him and you wouldn’t mistake any actor for him, because nobody looks like Willem Dafoe, except for Willem Dafoe. What makes him such a remarkable actor and why does he get to work with the best directors?  END_OF_DOCUMENT_TOKEN_TO_BE_REPLACED 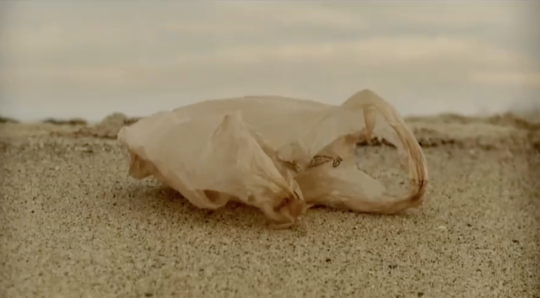 Ramin Bahrani’s Plastic Bag is exactly what you think it is: The story of a plastic bag. Not just any plastic bag: A discarded plastic bag. Abandoned by his maker, the plastic bag drifts across the landscapes of rural America (North Carolina), to finally arrive at his final destination: The ocean. Or as plastic bags call it: The vortex. Legendary film and documentary director Werner Herzog lends his warm and calming voice to the title character, a brownish plastic bag from a supermarket.  END_OF_DOCUMENT_TOKEN_TO_BE_REPLACED

Tell us a little bit about Incident at Loch Ness. What’s this movie about?
Incident at Loch Ness is a mockumentary, a faux documentary, in which a filmmaker wants to make a documentary about Werner Herzog. So Werner Herzog plays himself in this film and he’s followed around by this crew at all times, as he’s working on his latest (fictional) project about the Loch Ness monster. They go to Scotland to film some stories about the monster and Herzog has already made up his mind that the monster doesn’t exist obviously, but *spoilers*: He’s wrong.  END_OF_DOCUMENT_TOKEN_TO_BE_REPLACED

Wow. This is awesome! I wanted to highlight this news I just read on Indiewire, because it seems so outlandish and of course because I’m a  huge Werner Herzog fan. It was just announced that retired professional boxer Mike Tyson and Baywatch actress Pamela Anderson will be joining Russell Brand in the German auteur’s new project Vernon God Little. Not much is known about the movie as of right now and Herzog is still working on his upcoming fiction film Queen of the Desert.  END_OF_DOCUMENT_TOKEN_TO_BE_REPLACED 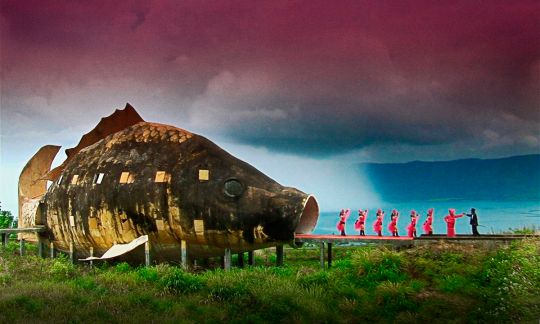 Spoiler Alert (For Real Life)
This is not a review, but a spoiler-filled discussion of Joshua Oppenheimer and Anonymous‘ (no relation to Occupy Wall Street I’m sure) 2012 documentary feature The Act of Killing. If you haven’t seen this documentary I suggest you watch it first before reading this, to fully appreciate it and be able to weigh-in with your take on it and your ideas. If you don’t care about spoilers or have seen the film: Read on, leave a comment and thank you.  END_OF_DOCUMENT_TOKEN_TO_BE_REPLACED

Second unit filming has begun! If you’re as excited as I am for Werner Herzog‘s upcoming film Queen of the Desert (I hope you read that title with a German accent), I highly recommend following the Queen of the Desert film blog. I will try to keep you updated for the most important news, but I’m not going to be able to post everything about and around the movie like they do. According to said blog, pre-shoots for Herzog’s new film began on December 18th, 2013 in Morocco.  END_OF_DOCUMENT_TOKEN_TO_BE_REPLACED

What’s Three Reasons? A lazy version of Five Reasons of course. But then isn’t it an exact ripoff of the Criterion Collection YouTube videos? Yes, but I prefer the word homage. Anyways, enough chitchat let’s get down to business. This is a short article about Emir Kusturica’s Underground (original title: Podzemlje). This film won the Serbian auteur the top prize, the Palm d’Or, at the Cannes Film Festival that year.  END_OF_DOCUMENT_TOKEN_TO_BE_REPLACED