As of right now Gregg Araki‘s newest feature White Bird in a Blizzard, based on the French novel Un Oiseau blanc dans le blizzard, is still in post-production. While there is no official release date yet, as a fan of the director I am getting more and more excited about the film. Apparently it’s a thriller set in the 80s about an angsty teenage girl (Shailene Woodley) whose mom (Eva Green) disappears. As Araki seems to suggest in interviews it’s a “serious” film, which is a rare thing for him, except for Mysterious Skin his work always tends to be on the more comedic and lighthearted side of things. It should be interesting to see him try something different. 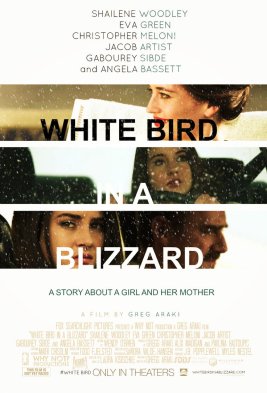 While there is no trailer yet (expect one with some cool shoegaze tune soon!) there have been two posters circling around the web. Since Araki’s films usually deal with “uncomfortable” themes for mainstream American audiences, like sexual abuse, depression, drugs and sexual confusion, the film was financed with French money. Seeing that it has some big names attached, like Shailene Woodley, Eva Green, Christopher Meloni and Shiloh Fernandez we hope the film is going to be a hit and gets a wide release. I will certainly keep you up to date with any news surrounding the picture, but for now take a look at this video of Gregg and Shailene discussing the movie.