It’s no secret Orson Scott Card (writer of the book Ender’s Game is based on) has been a vocal opposer of same-sex marriage. A small amount of the price you pay for your movie ticket will be given to Card himself, who finances anti-gay groups. Consider this however: Ender’s Game is not a film with an anti-LGBT message. Sure, the artist’s life and ideology influences his art (even subconsciously), but at the end of the day we should be concerned with judging their art and refrain from judging the artist. What right do we have? I might not approve of everything Roman Polanski or Mel Gibson have done in their private lives, but I still respect and admire them as gifted people. That’s right, at the end of the day we’re all human. One of my favorite bible passages Jesus says “let the one who has never sinned throw the first stone!” John 8:7 or one of my all time favorites “Do not judge, or you too will be judged.” Matthew 7:1.

A boycott would make more sense if Ender’s Game was a hateful film, with a negative message. While the film looks to be uninteresting, bland and completely boring, I’m afraid the only minority it might piss off is film snobs, like myself.

I won’t tell you what to do though. I’m sure there are enough people doing that already. I’ll just tell you what I think are some good reasons to avoid the film, and what aren’t. Also, if you want a film to bomb, ignoring it is the best way to go. Protests and controversies cause buzz (even if it’s negative buzz) and people attract people (network effects). The more people talk about something, the more it will be talked about (eventually going viral). This article is proof. Oh, and remember Martin Scorsese’s The Last Temptation of Christ? It was set to make no money, but then ignorant protesters got people talking about it and it wasn’t the financial disaster the studio feared it would be. 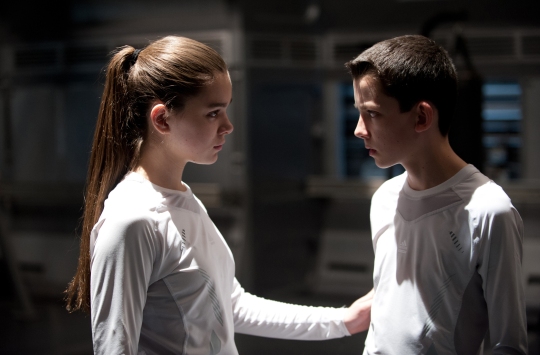 1. Is Orson Scott Card the only one getting paid?
Think of the hundreds of people that work on the production and promotion of a film. Most of them probably don’t support Card’s views: They’re just trying to make a living. If you think you’re only hurting Card by boycotting Ender’s Game, think again.

2. Do you always know the people you give your money to?
In a globalized world we depend from millions of people all around the world. Do we always know them? Do we know what they do with the money they get from us? Of course not, that is impossible. So doesn’t it seem a bit hypocritical to start caring now?

3. Do you care about the LGBT community?
It might seem odd, but by trying to show that you care about the gay community, you’re actually hurting their image. Why? Because boycotts are lame. By default people joining boycotts associate themselves with something lame. A boycott is an extreme solution and you know who’s extremist and tried to get films banned in the past? The same people you think your “fighting” against.

4. Do you love movies?
If you do you shouldn’t discourage people from seeing them. The film industry is experiencing a decline in moviegoers as is, why would you tell people to go to the movies even less? Seems counter productive.

5. What image of yourself are you trying to communicate?
Clearly, if you want to boycott this film you’re trying to send a message. You’re trying to position yourself as a liberal, tolerant person, an advocate of gay rights. A cool person. Like I told you though: Boycotts are about as cool as homophobia. Instead of expressing your hate for something, why not try to be a bit supportive? Hate is a negative feeling. Why not support gay artists instead? Go to a LGBT film festival or rent a Gregg Araki film. Be creative and don’t hate people who hate other people, otherwise how are you any different from them?

Beyond image, nurturing hateful feelings towards others isn’t healthy in the long run. Trying to empathize and put yourself in other’s people’s shoes, trying to love people surely makes you feel better. Love conquers all, remember? But maybe you’re not convinced about this whole high & mighty discourse of mine and are still thinking about joining the boycott. I get it, we all want to be part of something bigger, and that’s fine. I respect your choice, even if I don’t agree with it. Personally, I won’t be seeing the film, because the trailer looked boring and uninspired.

I hope you got an alternative point of view from what you’d get from say television. Oddly enough they like to make all Christians like fundamentalists, but have no interest in exposing the silliness of boycotts like this one. But I want to end this article on a positive note.As human beings we tend to be afraid of what’s different from us and what we can’t understand. Hating minorities comes naturally to us. We should try to be more tolerant. Some people are easy for me to tolerate, some are not. Of course I could show off that I am tolerant, but am I really? True tolerance means not to hate people who stand for ideas you hate. Like Voltaire said “I do not agree with what you have to say, but I’ll defend to the death your right to say it.” That’s what mass media will never tell you, because this kind of tolerance is hard, far from pretty and actually asks us to stand up for people we like to dump on. We shouldn’t hate the sinner, but the sin; much like if someone has very different political opinions from ours, that doesn’t automatically makes them a bad person.

As with everything you do, if you do it in good conscience that’s the right way to choose. If you feel at peace with not watching the film, for whatever reason: Don’t. If you feel good watching it, don’t let other people talk you out of it. Stand up for what you believe in, and if one day you realize that you might have been wrong, be humble enough to admit it to yourself and others. There’s no shame in that. And now before I derail completely, I’ll end this piece.