Yes, ladies and gentlemen they’ve already announced the movies playing at Sundance 2014. Since the festival prides itself over the fact that it almost exclusively picks movies from new-comer directors or lesser known filmmakers sometimes the only guidelines we have when picking a Sundance indie is the cast. Being an Aubrey Plaza fan and seeing that the movie also stars the likes of John C. Reilly and Anna Kendrick (which never hurts) I’m going to put this one on the list of movies to watch out for next year. Looking at these first stills for the film I have to say I’m getting strong Warm Bodies vibes, which is not a bad thing, but let’s just hope that the film is original and not a trying to be that movie (which I really liked by the way).  END_OF_DOCUMENT_TOKEN_TO_BE_REPLACED

Blue Jasmine wasn’t even released in Switzerland yet and already we get a peak at Woody Allen‘s next project. It’s called Magic in the Moonlight and it’s basically a romantic comedy set in 1920s and 1930s France. The film stars Emma Stone and Colin Firth in the lead roles. Hamish Linklater, Marcia Gay Harden and Jacki Weaver will co-star. It doesn’t look like Woody Allen himself will star in the film, which lately seems to be a good thing.

The film was shot by one of my favorite cinematographers, Darius Khondji, who has previously worked with Allen on Midnight in Paris and To Rome with Love, both of which look amazing. Woody shot the period piece on location in southern France. At this point there aren’t any official plot details yet. All we know is that the story spans over two decades and that the film is set to be released on July 26, 2014 apparently, which seems weird because that’s a Saturday.

Academy Award winning screenwriter Diablo Cody is taking a shot at directing with the upcoming film Paradise. Cody described the film as “a non-cynical movie that would inspire positivity”. The story revolves around a young conservative Christian woman (Julianne Hough) who survives a terrible plane crash, but then suffers a crisis of faith. She goes to Las Vegas, where she indulges in a more liberal lifestyle meeting characters played by Octavia Spencer and Russell Brand. Nick Offerman plays Hough’s overbearing father.

As a fan of Jennifer’s Body and especially Young Adult (my favorite Diablo Cody screenplay to date) I am very excited for this film. I’m not necessarily familiar with all of the actors, and Russell Brand wouldn’t exactly be my first choice, but I trust Diablo to have written a fitting role for him. I’m curious to see what visual style she choses. Cinematographer Tim Suhrstedt photographed some great and good-looking films and these stills are definitely colorful.

Diablo worked with some great directors (namely Jason Reitman) and it looks that she learned a lot. Hope this film has more to offer than a good script. However if the script turns out to be the best thing about the film, I’m still going to be pretty satisfied. Also, I have a hard time believing the film is not going to be cynical. I would also be disappointed if that turned out to be the case. It might be a function of me being judgmental, but with a premise like that, the result almost has to be something cynical, at least to a certain degree.

Here are a couple stills and a lovely picture of Diablo behind the camera. 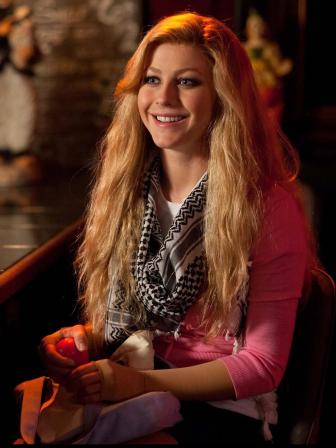