Michael Bay just released a first look at the new Bumblebee for Transformers 4. Looks like B is back to vintage, with more of a muscle-car look. It’s “a highly modified, vintage 1967 Camaro SS” to be precise. Optically there’s clearly less yellow, more black.

Personally, I think it looks totally badass. I was always a fan of the Camaro in the first half of the first film, because it had more character, as an old time American icon. This one looks even better, although I must say I preferred the previous paint job with the stripes. 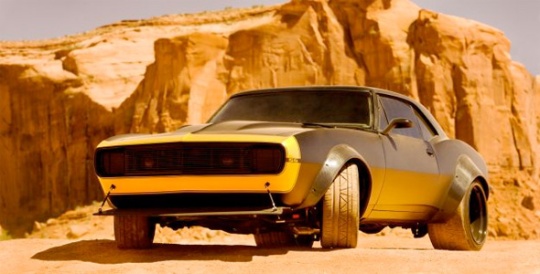 There are no plot details on the movie yet, but honestly who needs them? It’s a Michael Bay film, we watch those for the big action set-pieces and the glossy visuals. The cast however has already been announced: Mark Wahlberg, T.J. Miller, Jack Reynor, Nicola Peltz, Stanley Tucci, Kelsey Grammer, Sophia Myles and Li Bingbing.