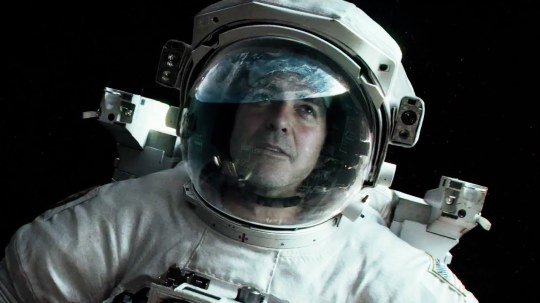 Medical engineer Dr. Ryan Stone (Sandra Bullock) and veteran astronaut Matt Kowalski (George Clooney) are on a mission in space to fix some fancy machinery. Suddenly, right before finishing their job and safely returning to earth with the rest of the crew space junk from another satellite hits their space shuttle. Stone finds herself catapulted into big black space seemingly drifting away forever. Fortunately, her charming colleague can keep his cool in a situation of chaos and mayhem. He is able to retrieve her, but her oxygen levels are low. Time is of the essence and now the two sole survivors of the expedition will have to find a way to reach the next space station and get back to earth. Unfortunately, their troubles have only begun. Will they make it to the Chinese station where the vodka is safely stashed in a place only Clooney knows? Don’t worry: No spoilers.  END_OF_DOCUMENT_TOKEN_TO_BE_REPLACED

One bad movie. Let’s get it over with. I want to get to the good part.

Y Tu Mama Tambien (2001) – 5 (IMDb 7.6) – Drama (Mexico)
I love coming of age/summer-films/let’s-never-grow-up type of movies, but this one was bad for several reasons. I didn’t like it’s judgmental tone, the pacing is off, the editing is terrible and the ending is so boring and evasive it’s not even funny. The film uses a terrible narrative device, where whenever the narrator reads his horribly written script all audio must fade away, taking you completely out of the film. Now, I could accept that in part if he had something interesting to say, adding to the story or whatever, but the information he gives us is completely fucking useless. I couldn’t care less about the crummy details of these people’s life, just show us what’s happening right fucking now. It’s also a pathetic attempt at whimsical comedy, which never works because there’s one funny scene in the whole film and it happens fairly early on in the film.
A big fail on so many levels, this film is somewhat saved by its good cast, the performances they give are sub par, but I entirely blame the director for it. Alfonso Cuarón, whose name I kept hearing, is as overrated as it gets. I don’t know, maybe the film just didn’t work for me, but I do think a lot of what I dislike about this film is the director’s fault. The story and the idea per se are fine and I even like those a lot, but the execution and the composition are just dreadful. It just felt as if the director was trying to be edgy, but afraid to go all the way. It’s a cop-out, and although there are some good ideas thrown around, none of them are fully explored. And Maribel Verdú, who starts out as a fun character, just becomes the most annoying bitch ever somewhere around half film and for no good reason.