In 1946 Billy Wilder’s The Lost Weekend (1945) won the Austrian-American auteur five Academy Awards: Best Picture, Best Director, Best Actor and Best Adapted Screenplay (the film is based on Charles R. Jackson’s homonymous book). While I love to make fun of the Oscars or get really pissed at their poor decisions, this is one of those instances where I feel they got it right. Then again, you can’t go wrong with Billy Wilder. I recently watched this film for the first time and absolutely adored it. In typical Criterion fashion I decided to share Three Reasons why I think this is a must-see.

Reason I: Alcoholism as a Horrific Addiction

Before The Lost Weekend alcoholism and drunk characters were played for laughs. The issue was never explored seriously in American cinema before Billy Wilder decided to give it a shot. In The Lost Weekend Ray Milland plays Don Birnam a New York writer with an alcohol addiction. While Billy Wilder is mostly known for his comedic films, in The Lost Weekend he takes a more serious approach. The result is a scary film which shows how destructive, devastating and dark alcoholism is in a person’s life.

Alcohol ruined Don’s life. He can’t write anymore, he doesn’t have any friends, his relationship with his girlfriend Helen (Jane Wyman) is on the brink of failing, while he already alienated everyone else out of his life (including his brother), he doesn’t have any money, his psychological and physical conditions are both detrimental. In short: He is stuck in a vicious cycle with no hope of getting out (alive). He is seriously contemplating suicide and everything just seems terrible and depressing if you think about it, but that’s the nature of addictions.

In my experience and from what I know from addictions, that’s a very accurate portrayal. I think everyone struggles with addiction at some point in their lives, whether it gets as bad as in this film is another question, but certainly we all have something that we use to self-medicate, a short cut to quick dopamine release. Watching this film I realized just how bad things can get if you don’t try to pull yourself out and get help. Helen underestimates the situation at first “He’s not hurting anyone” of course that couldn’t be further from the truth. Not only is Don hurting himself, he eventually ends up hurting her as well.

I am glad that the film ends on an uplifting note. There’s still hope for Don. Helen’s unconditional love for him and her patience and hopefulness are eventually so contagious that Don believes that he can beat his addiction. Before, it seemed that Don only ever tried to stay clean relying on his own strength, which only caused him to relapse, this time he has someone supporting him. He has seen how bad it gets, he hit rock bottom and now he’s ready to try it again. It’s not going to be easy, but his attitude seems to have changed so there’s a chance he might actually succeed.

Yes, I’m pretty sure that’s a term I just made up. Around this time in Europe, and especially Italy, a new cinematic movement called neorealism (1944-1952) would surface. The goal was to create pictures that were as realistic and emotionally honest as they could possibly be in depicting society and the struggles of the human condition. This meant a lot of harsh and depressing films, but also some of the best Italian cinema ever. Clearly inspired by this post-world war II mentality Wilder is able to create his own version of Italian neorealism, without sacrificing style.

While Italian neorealism was in a lot of way a precursor of the Danish Dogme 95 movement, both of which strip their films from most stylistic flourishes, Wilder decides to keep his cinematic look and format. The Lost Weekend is beautifully shot. Not that those other films aren’t, but it’s inherently cinematic. The sets, while elaborate and realistic, are still “visible”. You can see that it was shot on a sound stage and not on location. Beyond that however there’s the same (raw) emotional honesty. This film rings true to me and so many other people I’m sure, because there are no embellishments.

There’s nothing funny or romantic or cool about Don’s addiction. Perhaps Wilder decides to take it a bit too far and almost exaggerates the negative effects of alcohol towards the end of the film, but still, he is doing so without a personal agenda or political propaganda. There’s still irony in Wilder’s writing. It’s not a humorless film, but the comedy does not come from Don’s alcoholism. Wilder’s tone, the atmosphere of his films, his worldview: That’s what draws me back in every time. That’s why I love his films, because in my opinion he truly sees the world and people for what they are. 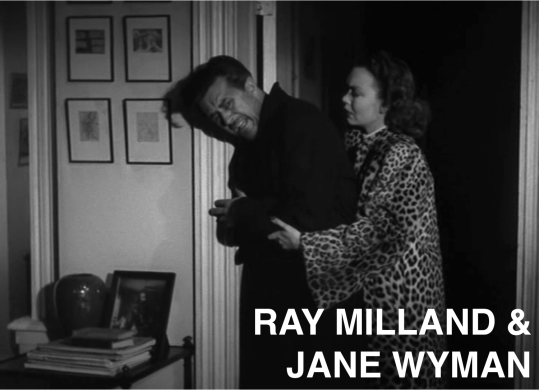 The reason why The Lost Weekend works as well as it does is because you have to credible leads, which both excel in their respective roles. Ray Milland deservedly won an Oscar for his performance as Don Birnam. Unfortunately, Jane Wyman wasn’t even nominated, although she is equally stunning in her supporting role as Helen St. James, Don’s girlfriend. The dynamic between the two actors is great. I love the chemistry between them. Not for one second you doubt that she is in completely in love with him. It’s a flawless performance. She really brings that love across effortlessly.

Ray Milland plays the drunk writer, which is arguably the biggest, oldest cliché in fiction narratives ever, but he manages to stay away from all the stereotypes and trappings of his role. He allows his character to be humiliated, to become so low and so sad, I can’t imagine that being an easy chore. It’s not a joyless performance however, you see flashes here and there of how happy he was when he was sober and in love with Wyman’s character. The romance is what I take away from this film. Love really does conquer all, even something as hard and painful as getting rid of an addiction.

One of the more romantic scenes in the film is when Don and Helen meet for the first time. They both attended a matinée of Giuseppe Verdi’s La Traviata and their coats got mixed up. I love Helen’s leopard coat, but I wouldn’t have thought that we’d see the coats playing a key role again at the end of the film. It’s really beautiful, because their story comes full circle and in a lot of ways they find themselves as they were at the beginning. So now they have a choice: They can decide to make it work or go their separate ways and they decided to start fresh and it’s the sweetest thing ever.

Those are my three reasons. What are yours?