Ryo (Ôno Keita) just moved into a new apartment. Satsuki (Aoi Sora) is his hot neighbor, so hot in fact that he gets off just by listening to her taking a bath or showering. Ryo starts an unhealthy obsession with Satsuki, which is okay because her boyfriend Yuta (Kato Hiroto) is an even creepier stalker. Unbeknownst to her, Satsuki starts a relationship with two weirdos at once. What will happen when she finds out that she’s been spied on by the two men she’s been dating? Why does Ryo prefer masturbating instead of having sex with Satsuki? And why doesn’t anyone call the police?

Man, Woman & the Wall (original title: 聴かれた女, Kikareta onna no mirareta yoru) is your typical Japanese erotic-thriller where being a stalker is actually viewed as somewhat cute. Now, I’m not sure if that’s just something writer and director Yamamoto Masashi thinks or if being a pervert is more socially acceptable in Japan. In any case I was rather surprised by the ending of this film, where Satsuki falls into the arms of her neighbor, who granted is less creepy than her boyfriend, but still showed some psychotic behavior by obsessively spying and documenting her every move.

That being said, I greatly enjoyed Man, Woman & the Wall, because it’s oddly romantic, steamy and sexy with Aoi Sora showing off her hot body in more than one occasion. You can definitely see why Ôno Keita’s character would have a thing for her. The interesting thing is that he “falls” for her even before he has seen her. He is mystified and fascinated just by the sounds that she makes. It is no surprise then that when he actually meets and gets to know her in real life he feels like she’s a slightly different person from the one he built in his mind. That’s why he doesn’t want to have sex with her at first.

What’s interesting is that Ryo’s friends don’t seem to think that his shady behavior is reprehensible, in fact they even help him out. Though we don’t know much about Ryo or his “backstory”, he clearly is a lonely man. He probably doesn’t even have a hobby outside of his work, at one point he even mentions that being a journalist is both his job and his passion. So that’s cool, but it’s also interesting, because he takes the same approach in his relationships. The process of getting together and make Satsuki fall in love with him isn’t that far away from what he’d do to research and write a successful article. 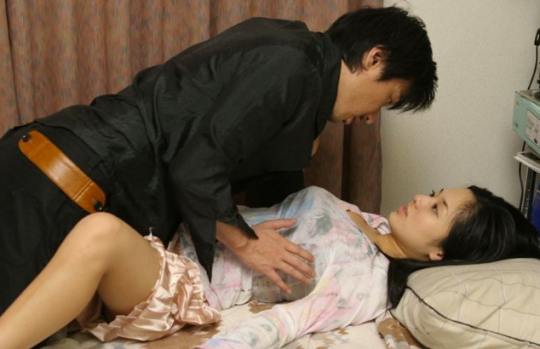 Stylistically, this film looks slightly amateurish. Now, while clearly some of that has to do with a limited budget, I’d like to think that it’s also a deliberate choice on the part of the filmmaker. Masashi shoots this film almost as if he were a stalker himself. The tone he creates is very interesting, because it’s a mixture of many different genres. You have your comedic moments, there’s a little bit of melodrama of course, but then Ryo’s mobster friend gets involved so it’s a bit of a crime film as well, some scenes are very tense like a thriller and again overall it’s very romantic, if twisted, male fantasy.

In terms of acting I think everyone does a fine job, I especially got a kick out of Kato Hiroto‘s performance, hamming it up as Aoi Sora’s unstable (almost schizo) boyfriend. Aoi Sora of course is perfect casting, like Ryo I felt that her character progressively reveals her true self throughout the film. So she does a great job of “changing”, while still being “herself” all the time and not becoming the usual, boring love interest we normally see in these type of films. Ôno Keita‘s role is not really that difficult, but it’s still a satisfying performance and the problem is really in the cliched character he plays, so that’s a script problem if anything. 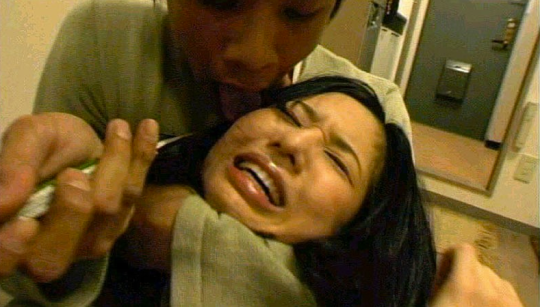 I liked that while this film could have been easily very repetitive and by the numbers it manages to bring in enough interesting elements, like the debt collector/mobster guy. It’s also interesting to have an anti-hero male lead in what’s ostensibly a romantic comedy structure (at first), but then not only leaving out the conflict part that could come from Satsuki discovering that Ryo’s a creep as well, but also ending the film on a rather ambiguous note. Can Ryo have a normal relationship with Satsuki? One that doesn’t involve him listening to her through his bedroom wall (the wall of course being also a symbol for Ryo’s emotional state)?

In any case, Man, Woman & the Wall is a fun, funny, cute, romantic, hot and entertaining film. Masashi blends all the genres he goes for seamlessly and manages to craft something that feels genuinely unique, charming and original. While the film might look a little cheap aesthetically, it works perfectly fine for the story it’s telling. The performances are a bit heightened and subtle depending on what the characters require, which again creates a nice combination and flavor. If you like Japanese cinema, unconventional love stories and stories that unfold mostly in one closed location this is the perfect film for you.