Mary (Margherita Caruso) is pregnant. Joseph (Marcello Morante), her fiancé is worried, because they’re not married yet. God sends His angel (Rossana Di Rocco) to reassure him: She is still a virgin. The Lord himself made her pregnant with His Son, Jesus (Enrique Irazoqui). Flash-forward thirty years: Jesus is now an adult. He is preaching the Lord’s word to the people of Israel, gathering followers, healing the sick and making, casting out evil spirits and doing all kinds of miracles. Most people seem okay with that: But not the pharisees. He’s taking away their power, so they want him dead.

Pier Paolo Pasolini’s The Gospel According to St. Matthew (originally titled: Il vangelo secondo Matteo, which sounds less Catholic) is an art-house retelling of the Bible story of Jesus. Even though Pasolini was a gay, atheist Marxist who went on to direct the Criterion Collection classic Salò, or the 120 Days of Sodom, this is one of the most faithful portrayals of Jesus’ life. The film almost exclusively uses dialogue featured in the Bible text, which makes every word that is spoken become more important. As a result however there are a lot of silent and quiet scenes, which contribute to the film’s unique atmosphere and aesthetic.

Stylistically, this film reminded me of the works of Carl Theodor Dreyer and Ingmar Bergman. Certainly, if Werner Herzog were to direct this film he would have done a lot of the same choices, especially in terms of music. The fact that Pasolini shot this film in black & white adds another level of beauty, especially because he’s working with one of the best cinematographers of all time: Tonino Delli Colli. It’s almost a German expressionist, avant-garde, maybe even experimental look. As I was watching it I couldn’t help, but think that this film belongs in the Criterion Collection, along with the director’s other masterpieces.

What’s fascinating about The Gospel According to St. Matthew is the casting. A lot of these actors look distinctly Italian, some of them even have distinct regional accents, which can be distracting for a native speaker. But I really like Pasolini’s outside of the box choices for his leading actors. Clearly, this is a Pier Paolo Pasolini film, so he picked actors that fit his aesthetic, but wouldn’t necessarily be cast in a film of this kind. The character of Jesus is especially noteworthy here, because he mostly seems very angry. Jesus was a meek man, not a hippie or stoner, like some people like to think, but still a bit more chill than Enrique Irazoqui.

I liked that Jesus is shown speaking of judgment, but sometimes I felt that the film was missing the Gospel of grace, forgiveness and love. Don’t get me wrong, it was there, but if I think back of the Jesus character in the film as a whole, all I see is the serious look on his face. Some have criticized this film for being “Marxist” or whatever, but I don’t see it, especially because Jesus really did speak a lot of helping the poor and that we should be more focused on His kingdom and less worried about our material wellbeing. That’s in the actual Gospel of Matthew, Pasolini doesn’t play it up or add anything to it.

As an Italian, I had a particular appreciation for this film, because a lot of the settings seemed familiar. Like Mel Gibson’s The Passion of the Christ, this film was shot in southern Italy, where I’m originally from. The town of Matera, in Basilicata is particularly recognizable for its characteristic housing inside the mountains. In some parts the film felt almost too Italian, because of that, and you know because they speak Italian and feature Italian actors and it’s directed by and Italian director. But I love the costume design, especially the pharisees’ hats, which look like something out of a Tarsem Singh film. 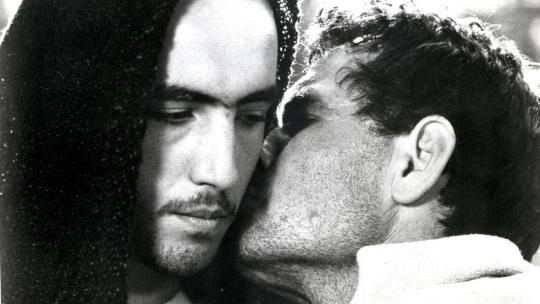 Pasolini tries to cover all the major plot points, but even with a runtime that’s slightly over two hours, he has to leave out some of it out. What I didn’t like about the film’s editing (Nino Baragli) was that sometimes you didn’t really feel the passing of time. Everything went so “fast”, not in the way it was told, but how it almost seemed that a lot of things happened in the same day. There are a lot of events following into other events, which probably didn’t occur during the same time frame or even in the same geographical location.

And while I like that this is a quiet and almost intimate film, sometimes I wish they had more extras, to show the multitude of people listening to Jesus’ sermons. It especially bothered me during The Feeding of the 5,000, where Jesus feeds 5,000 people with 5 loaves and 2 fish. In this film was more like The Feeding of the 50, which is considerably less impressive. Still, I’m almost nitpicking here, because overall the story benefits from the fact that there’s nothing flashy about it. The miracles simply show Jesus, Jesus walking on water was shot like the most normal thing and even His birth is not overdone or exaggerated.

One scene I wish lasted longer or was played up more was the crucifixion scene. This is the key scene in the whole story, but unfortunately, it’s once again just shown as another thing that happens and goes by really fast. Luckily, the film ends on the great uplifting note of Christ’s resurrection and his commandment to us to spread His word. Overall, it’s a great film, because it relies on the Bible text exclusively and doesn’t feel the need to add anything. It’s an immaculate picture and even though some might see the imagery as too Catholic it’s never done “on purpose”, but more a function of the director being raised in a Catholic country.

I love how Pasolini shows that Jesus loved the children and how they loved being around him, even though He was talking about very deep and abstract concepts. Unlike most adults, Jesus never underestimated little children’s intelligence. The “small scale” of the film is precisely what I like about Pasolini’s interpretation of the story. To quote Federico Fellini’s La dolce vita (1960), one of my all time favorite films: “I miracoli nascono nel raccoglimento, nel silenzio… Non in questa confusione”. Which roughly translates to: Miracles come from a place of meditation (or concentration, attention) and silence, not confusion.