Ramin Bahrani’s Plastic Bag is exactly what you think it is: The story of a plastic bag. Not just any plastic bag: A discarded plastic bag. Abandoned by his maker, the plastic bag drifts across the landscapes of rural America (North Carolina), to finally arrive at his final destination: The ocean. Or as plastic bags call it: The vortex. Legendary film and documentary director Werner Herzog lends his warm and calming voice to the title character, a brownish plastic bag from a supermarket.

The story of the plastic bag begins when a young woman picks him up to put her groceries, filling the bag and giving it purpose. The plastic bag is happy. His life has meaning. He is useful. The woman brings the plastic bag into her home. She uses it for all sorts of things. The plastic bag feels closer to her. He gets to hold the ice that will cool down his maker’s feet. He holds tennis balls for her when she goes training. Eventually however he will carry something less pleasurable, which will result in his maker throwing him into the trash.

As silly or gimmicky the idea of a short film (18 minutes) with a plastic bag as the central character might sound it works perfectly.  Not only does Werner Herzog manage to make you care about a piece of plastic, but the film also makes you think. The plastic bag becomes a symbol for humanity. Like the plastic bag we can feel lost and abandoned to ourselves on this planet. The bag is looking for his maker, or in other words: God. Is there a God? Why did he create us? Why did he put us in such a hostile place? These are some of the questions that Ramin Baharni’s film asks.

In his search for meaning the plastic bag meets a red plastic bag. They fall in love, but their “relationship” doesn’t last. The wind separates them, blowing them in opposite directions. This could mean that “human love” is only a temporary fix to keep our minds off of things. It’s brief, fleeting happiness, that doesn’t reconcile us with deep-rooted existential issues. The plastic bag’s happiness is a brief illusion. Even once he reaches the vortex in the ocean and is reunited with “his kind”, he still longs to be with his maker. Work, also doesn’t provide real fulfillment, because once the bag is old (and dirty) it serves no purpose anymore. 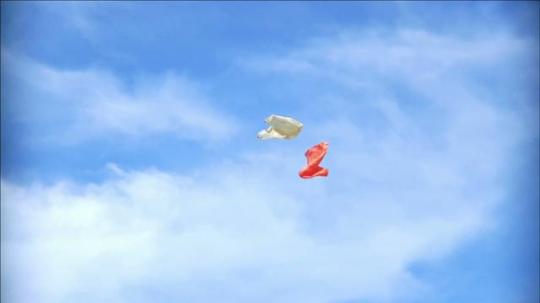 A literal reading of the film’s metaphor would be that God created us, but then left us to our own devices once we no longer served his purposes (whichever they might be). In this sense, searching for the meaning of life is completely useless, because if there once was one, it’s no longer there. Like the plastic bag, humanity as a whole is “immortal”: We keep reproducing ourselves and never die off as a species. Similarly because of its chemical composition a plastic bag can resist a long time on this planet, if it’s not burned or buried somewhere.

It’s needless to say that I loved this short film. While I don’t necessarily agree with the filmmaker’s view of God, it is fascinating how he arrives to the same conclusions that most Christians would. If there is a God and he is our Maker (as in Creator) the only way for us to be fulfilled and whole is to have a relationship with Him. Still like the plastic bag we might ask ourselves why do we even exist? What is our purpose? Is there a purpose? In Plastic Bag, the bag returns to the ocean: The water. No matter what your believes are: That’s where it all begins.

The film comes full circle. A film like this one works perfectly as a short, because no matter how much you love Herzog’s voice and German accent a 90 minutes version would be tiring and wear out its original premise. Plastic Bag works so well, because it presents us with strangely haunting imagery of desolated and abandoned places. Aside from Michael Simmonds’ cinematography, I also loved Kjartan Sveinsson’s (of Sigur Ros) music, which turns the plastic bag’s journey becomes almost a spiritual voyage, with mystical overtones and epic proportions.

Choosing Werner Herzog make the plastic bag come to life is genius for several reasons: 1) Herzog has a great and instantly recognizable voice you could listen to for hours; 2) Herzog discusses similar themes in his own films and 3) Herzog’s funny accent avoids making the film overly serious. That is perhaps the film’s biggest achievement: It never becomes preachy or annoyingly unilateral. Overall a great short, which I’ll certainly love to revisit over the years, hopefully discovering new things and looking at it in a different light.