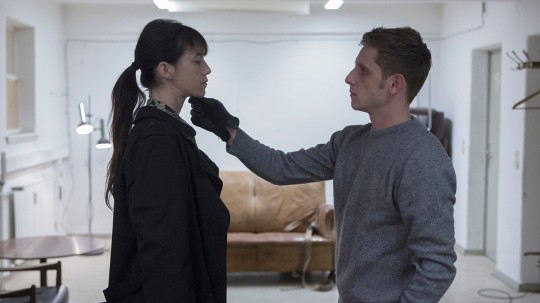 *SP( )ILERS*
Joe (Charlotte Gainsbourg) is numb. She can’t feel anything. Her vagina has become completely insensitive to any kind of sexual stimulation. Her husband Jerôme (Shia LaBeouf) is not enough to satisfy her. After all as much as he’d want to, he can’t fill all her holes at once. Time to experiment! What about a threesome with two extra-large negroes? Not working. How about some S&M with Jamie Bell? That works for a while, although it’s a problem, because Joe/Fido now has a little son and she can’t just leave him at home alone, can she? Pretty soon physical pain is not enough for her anyway. Time to start thinking about quitting.

Although is that even possible? Joe tries to suppress her own nature by completely repressing her sexuality. However like the viewer the director realizes that it’s not a realistic possibility, so Joe stays clean for like three weeks and then she’s back to her insatiable quest for sexual satisfaction. It’s interesting how her addiction gets in the way of her job and leads her to become a criminal, a debt collector for L. (Willem Dafoe). She also becomes a part-time lesbian for P. (Mia Goth), but at the end of the day Jerôme is all she really cares about. Unfortunately, Lars von Trier doesn’t believe in true love (or happy endings). 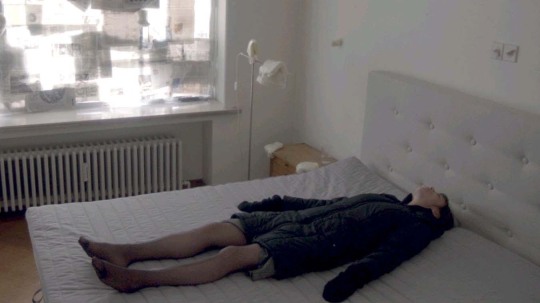 Lars von Trier’s Nymphomaniac: Vol. II concludes the epic life story of Joe, a depressed sex addict. The film starts just where Volume I left off. We find Joe’s body unable to respond to practically any normal sexual stimuli. This tears her up inside even more and worsens her “condition”, making her look for more “hard-core” solutions. Of course the further away she deviates from standard sexual intercourse the darker the film gets. Like Volume I, the second part doesn’t forget its sense of humor, however by the end of there’s not much to smile about. The film’s conclusion is sadly ironic, maybe, but it leaves little hope for Joe or humanity.

Throughout Nymphomaniac, the virginal Seligman (Stellan Skarsgård) represents a constant, a reliable character. His purity or more specifically asexuality is juxtaposed to Joe’s incurable and infinite hunger. I could certainly relate more to Seligman than to Joe in some instances. Although both characters are very sympathetic, Seligman explains to the audience what the film means. He’s “book smart”, but he has no real sexual experience, like zero. By the end of the story, it seems that the two have become friends. Joe even says that he might be her first real friend. What a beautiful way to end the film, but no, of course that’s not how it ends.

Seligman tries to have sex with Joe, just when she has decided to quit once and for all. Joe seems truly convinced that she’ll manage to quit this time and Seligman is in the way of that, so she kills him. It is irrelevant whether she’d actually succeed and we won’t ever know for sure. Just before that last scene, Seligman made a very heartfelt discourse about how Joe wouldn’t be condemned if she was a man. Like, it’s okay for men to be sex addicts, it might even be considered “cool” by some people, but if it’s a woman then that’s troubling. It’s something that we can’t tolerate as a society.

Seligman calls out society for its hypocrisy, but ends up being the biggest hypocrite in the film. He knows what’s right and wrong, because of his literary culture and yet his impulses are just as primal and animalistic as Joe’s. His last words are something like “Oh, come on you’ve done it with a thousand men”. In that moment Seligman reveals his true nature for the first time. He’s just like any other man Joe has encountered. What does that mean? Basically, that there is no hope. If even this almost unicorn-like creature can be as low as any man Joe ever fucked, then that means that there are no “good” people. 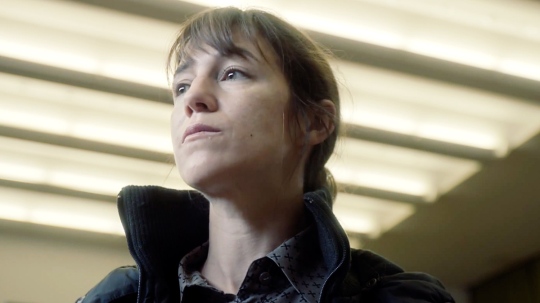 Seligman dies, much like all the townspeople of Dogville are killed in Lars von Trier’s homonymous 2003 film. Joe’s integrity remains intact. She never becomes something that is not true to herself. She always does what she feels is right. She doesn’t kill Jerôme, even though we would understand it if she did. In this sense Joe may not be a “good” person by conventional standards, but at least she never negates her nature or tries to be something she’s not. That seems to be von Trier’s message with Nymphomaniac, but it’s also the root of Joe’s depression and burden.

Volume II is just as splendidly filmed as I. The acting is every bit as phenomenal. Jamie Bell, Mia Goth, Willem Dafoe and Udo Kier are welcome additions. Even though Kier only has two lines, his scene is quite amusing. If Volume I was mostly Stacy Martin‘s film, this second part clearly belongs to Charlotte Gainsbourg. My only criticism is that the switch from Martin to Gainsbourg is not very clean. Three years pass, but the character ages thirty years without an explicit explanation. My interpretation is that her pain, childbirth and numbness made her age a lot faster than people normally do. 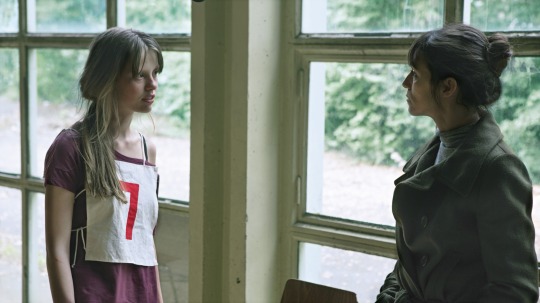 Also, Michael Pas, playing an older Jerôme doesn’t look much like Shia LaBeouf at all. My favorite thing about Nymphomaniac is von Trier’s camera work and how he frames his actor’s faces up close, but from unusual angles. There are a bit less digressions, in the second half of the film, mostly because Joe gets tired of them, but also to help the film’s pacing. I particularly enjoyed a scene where little Joe (Ananya Berg) has a spontaneous orgasm and vision while on a school trip. The visual effects are spectacular, but the scene also once again reinforces the notion that Joe is some sort of blasphemous Christ figure.

The symbolism also returns towards the end when P. pees on Joe, a scene that reminded me of Christ’s crucifixion and the Romans giving him vinegar to drink instead of water. Much like Jesus, Joe (same initials) gets forty lashes during one of her S&M sessions (although Seligman points out that Jesus likely got 39). The similarities don’t end there. Joe is betrayed by P. a person that is very close to her, in the same way that Jesus was betrayed by Judas in the garden of Gethsemane. Speaking of gardens, once again trees are prevalent symbols for souls and it’s very interesting and touching to see Joe finding the tree that represents her.

There’s also a fun scene that is a reference to Lars von Trier’s own Antichrist (also starring Charlotte Gainsbourg and Willem Dafoe). The scene in question is the one where it looks like Joe’s son is going to jump from the balcony. Like in Antichrist Gainsbourg left her child unsupervised, it’s snowing outside and Händel’s Lascia Ch’io Pianga is playing in the background. You really think he’s going to jump, but then luckily Jerôme returns home from work. I’ve never seen a director do something like that, it was a fun little treat, I’m sure every Lars von Trier fan appreciated. Again, of course if you’re an Andrei Tarkovsky aficionado there are nice nods here and there as well.

Overall, although I prefer Volume I, because I feel that I can relate more to Joe’s character and she is closer to my age in that film, Volume II is a great conclusion to an epic tale of a woman’s life. Some people have complained that the film is unnecessarily long. Personally, I don’t see that problem whatsoever. The film is just the right length it needs to be, although it may seem a bit too eager to check off (almost) all existing sexual tendencies. However to tell a person’s life, especially if it’s as eventful as Joe’s, you need time, to really convey the weight and the passing of time. To me Nymphomaniac is never boring and never feels like it goes on longer than it should.