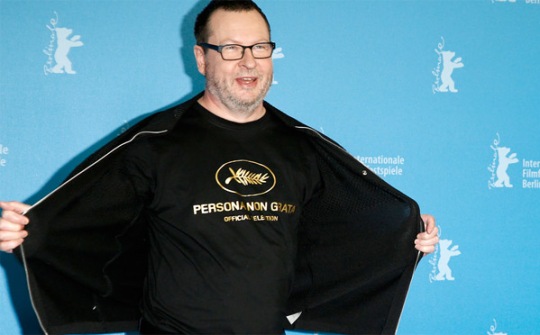 Lars von Trier is awesome. If you needed more proof of that he’s not only an amazing director, but also a marketing genius: Here’s a picture of how he showed up at the red carpet for the premiere of the uncut version of Nymphomaniac: Volume I at the Berlin International Film Festival. After making some unfortunate jokes about Hitler during the 64th Cannes Film Festival of 2011, when his penultimate film Melancholia won Kirsten Dunst the Best Actress Award, he was declared Persona Non Grata. 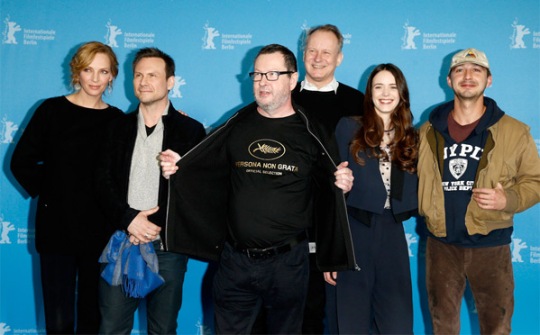 For those of you who don’t speak Latin, it basically means that he’s banned from the festival, because the French didn’t get his weird Danish humor. Having somewhat of an odd sense of humor myself I can totally relate to Lars. Love that t-shirt by the way. It says: “Persona Non Grata – Official Selection” and then it’s the traditional Cannes logo with the Palme d’Or. In related news Nymphomaniac co-star Shia LaBoeuf decided to pull yet another one of his stunts during one of the press conferences.

A journalist asked him a question about the film and he simply replied: “When the seagulls follow the trawler it is because they think sardines will be thrown into the sea. Thank you very much.” and then left. If you want you can see the clip here. Oh, and he’s totally still missing his tooth. Whatever the reasons behind his behavior he managed to get some attention and if it helps promoting the film I have to say that I don’t care. Nymphomaniac’s release date is nearing and I can’t wait to see it and tell you all about it!