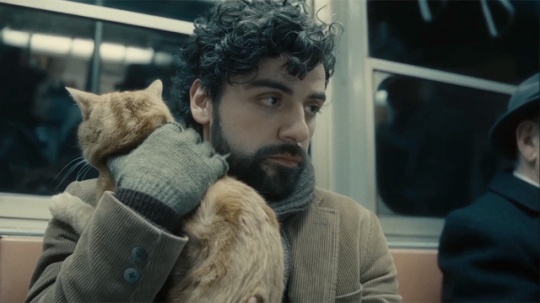 Llewyn Davis (Oscar Isaac) is a young folk singer living pretty much with anyone who owns a couch in Greenwich Village. The year is 1961 and record labels and executives are beginning to think that maybe folk music isn’t so hot anymore. Meanwhile poor Davis is freezing his butt off, wandering around the gelid streets of New York with (Academy Award Nominee ®) Ulysses, a red cat. He’s broke, his “ex”, Jean (Carey Mulligan) is pregnant, his dad isn’t talking to him and did I mention how cold it is? Davis drifts through the States in search of something better, but ends up in the same place where he started.

Critically acclaimed director duo Joel and Ethan Coen (the so-called Coen brothers), were never on my list of favorite directors. For some reason I just felt that their film were emotionally detached, distant and cold (or maybe I just don’t “get” them). It is only appropriate that a film about an emotionally detached, cold and distant character would end up being one of my favorites of their works. Inside Llewyn Davis has everything that made the Coens some of the most beloved American directors of our time: The weird-ass humor I never got, the slice-of-life Americana feel, their love and passion for music and period films.

Coldness and cold are some of the main themes of the film, which are also beautifully reflected in Bruno Delbonnel’s cinematography (he’s also Tim Burton’s new DP) and the icy color palette. Delbonnel received a well-deserved Oscar nomination for it. The film’s aesthetic, including the sound, are the key strengths of Inside Llewyn Davis. For as much as I generally don’t care for the Coens (except for Raising Arizona and A Serious Man, two great films) their movies are always brilliant on every technical level (with the exception of O Brother, Where Art Thou?‘s terrible cinematography).

Also worth mentioning is Oscar Isaac, who gives a great performance here as the main character. The actor completely disappears in his character. It’s not the most likable character, but Isaac’s performance is certainly memorable and I am stunned that the Academy failed to recognize it. The fact that Davis’ character works so well is also a testament to the Coen’s screenwriting talents. On more than one occasion I had the feeling that the character of Davis was also being explained through the cat. In a lot of ways Davis is a bit like the cat. He’s a vagrant: He goes where he finds some “milk” and then moves on.

The cat, by nature, is also a very idle animal, a pet that serves no real purpose other than company or play. Davis plays, but he’s not really of great company. He’s rude, he pushes people away and seems to be deeply angered at something or nothing in particular. He doesn’t try to be nice to people. He doesn’t seem to care that nobody loves him. He wonders through life aimlessly, but at the same time is surprised that his life isn’t going nowhere. Again, Isaac does a great job of showing all these emotions and portraying these character traits, by holding everything inside. The Inside part of Inside Llewyn Davis is the key here.

Overall I enjoyed Inside Llewyn Davis quite a bit. It’s not really an eventful film, not much happens and it’s rather slow-paced. If you can get past that however you’ll find an interesting character piece and maybe discover folk music. It’s not really my thing, but then what do I know about music? For what it’s worth I thought that Isaac also did a fine job in his singing and playing parts. The music plays an important role of course, this being a film about a musician, but I liked that they didn’t make it too cheesy, aka that every song also had to reflect something in the character’s life.