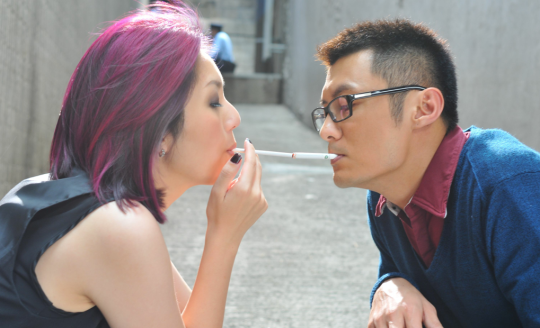 Cherie (Miriam Yeung) is a cosmetics sales girl at Sephora. During her breaks she meets up with a bunch of random people working in neighboring buildings to share a cigarette. Between puffs she meets Jimmy (Shawn Yue), an advertising executive, a couple years younger than her. In a matter of days and a bunch of texts, the two get know each other and fall in love and it’s all thanks to Hong Kong’s Smoking Ordinance which bans indoor smoking. How sweet is that? But aren’t things going a little bit too fast? And what about Cherie’s boyfriend?

Love in a Puff (original title: Chi ming yu chun giu) is a romantic comedy about how smokers are brought together by their shared addiction. I loved how the film shows that something good can come from something as annoying, paternalistic and limiting of personal freedom such the recent anti-tobacco craze (and all the laws deriving from it). The film took me a while to get into and understand, but once I felt what it was going for and how it was constructed I was completely on board with it. The story is fairly standard, but the dialogues and interaction, and the way the relationship is portrayed feel authentic and honest.

The film also mainly works because of the chemistry between Yeung and Yue, who also happen to be excellent actors. The story is more about showing little moments they share, bits of dialogue, texts, everyday life and anecdotes related to smoking. I found it a bit weird that there were some documentary style segments interviewing the characters on their thoughts about smoking and relationships and stuff. Not that they weren’t interesting, but they were just intercut with the main narrative, but I didn’t exactly get what purpose they served. Other than that a funny and charming little flick I definitely recommend.