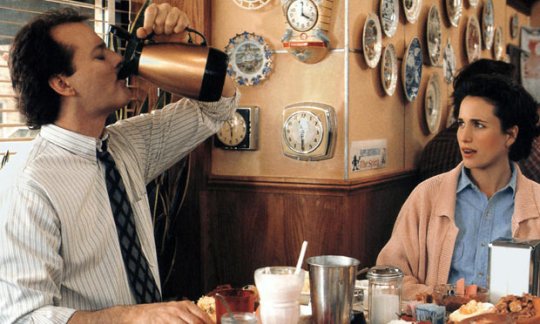 Harold Ramis’ Groundhog Day might not be the first film that comes to mind when you think about the great classics of cinema, but it is a universally well-liked movie. Its firm position in the IMDb Top 250 is proof, not that it needs that, but it’s always nice and it totally deserves that spot, unlike some flavor of the week films randomly showing up due to fanatic fanboy voting (but that’s a topic for another day). Groundhog Day is one of my brother’s favorite films and he wanted to re-watch it the other day and so we did.

I have to say it’s a good film for the whole family and especially with the winter/holiday-feel it’s perfect during this time of the year. I’ve seen the film for the third time now and there are so many reviews around that one more from me would pretty much be superfluous. Instead I thought this film could benefit the Three Reasons treatment, to maybe convince younger viewers who aren’t aware of this film or haven’t seen it yet, because it’s from 1993, which makes it only 21 years old, but still… 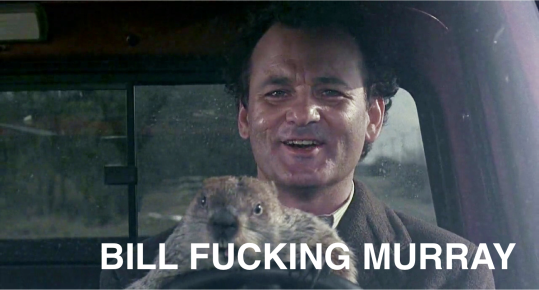 Yes, that’s a Zombieland reference in case you were wondering. Whoops, spoiler alert! Of course my first reason is Bill Murray. He’s one of my favorite comedians. Scratch that: He’s one of my favorite actors. It’s no secret that Lost in Translation is one of my very favorite films and of course being a Wes Anderson fan I’ve seen the guy in a number of movies. Beyond that he really seems to have made a name for himself after Sofia Coppola’s masterpiece.

I don’t think I need to convince anyone of Murray’s comedic genius or of how likable his screen persona is. Murray is the center of the story here, the main character and he really makes the movie. Not only is he good in the funny scenes however, as the grumpy weatherman, he’s also great in the more “serious”, dramatic parts of the film. It’s an impressive performance. There are always nice little touches and character quirks he adds that I’m sure are not on the page.

That’s why he’s able to make his characters so real and relatable, and that’s why the film itself really comes to life and works so well. It’s also fascinating to see him be so effortlessly charming and entertaining. I think his charisma is unique and something you’re almost certainly born with. The rest of the cast does a fantastic job as well, I’m not trying to sell them short or anything, but surely Murray is one of the most memorable things about Groundhog Day. 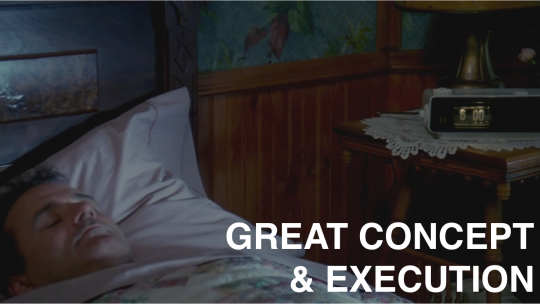 I should have probably put this as the first reason to explain what the film is even about for those who haven’t seen it. Basically, it’s Bill Murray, as a weatherman and he goes to this small town, where every year on February 2nd the townspeople have this ritual of asking Phil, the groundhog, if the winter is over. If Phil sees his own shadow it’s bad news and it’s going to be really cold. Long story short: Murray is stuck in this small town he dislikes, because of a blizzard, the next day he wakes up and it’s the same day. So basically he’s reliving the same day (Groundhog Day) over and over again.

It’s a cool premise, isn’t it? But how many movies have great concepts and then execute them poorly? Too many. Honestly, when I was younger a cool idea was enough for me to love a movie. Now that I’ve seen a lot more movies I get pissed whenever the cool concept is the only good thing about the film, because it feels like such a wasted opportunity. With Groundhog Day however you get both, which is pretty awesome. Sure, a lot of it is Bill Murray, but also the screenplay. By keeping it simple and not throwing in too many crazy ideas, but focussing on the main character instead the film remains grounded in something that makes sense.

I like how the high concept is used to create a romantic comedy, a sub-genre of movies usually dismissed as “chick flicks”. Instead Groundhog Day makes the best of both romance and comedy. Not only that, but I think that it speaks or should speak more to men than women, since the main character is a man (but of course the film’s message is true for everyone). It’s a good balance of genres and when the unavoidable dramatic parts come in they don’t feel cheap and unearned like in so many romcoms. Again, it’s a testament to the script and the convincing acting. 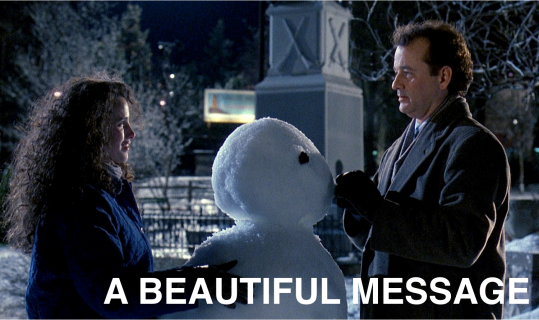 Basically the moral of the story is: Your life will be better when you stop caring only about yourself. It’s a very timely message and it certainly felt that it spoke to me specifically. I don’t claim to have a lot of wisdom or life experience, but one thing I’ve learned is that it definitely pays to think about others and not be so self-centered. It’s hard, but it’s totally worth it. Often times people expect others to change, but why not work on yourself and try to better yourself? At the beginning of the story Murray’s character is only interested in what makes him feel good and doesn’t give a flying fuck about anyone else.

When however he realizes that he’s stuck in the small town he hates, he soon realizes that he is the problem and not everyone else. So he tries to be a better person. He takes on piano lessons, ice sculpting lessons, he helps people with their problems, he is nice to people (even if he doesn’t benefit anything from it directly) and he tries to be more positive in general. And as naïve as that may sound I think that’s precisely why a lot of people are unhappy and unsatisfied with their lives. Helping other people ends up making you feel happier and more fulfilled.

Especially around New Year’s and New Year’s resolutions I think this is a beautiful message of hope and optimism. If you disagree or don’t believe it works, think of it rationally. If you’re busy focussing on yourself all the time, that can get depressing very easily, but if you try to be busy with anything else that’s automatically positive. Being busy takes your mind off of things and it really is true that there’s more joy in giving than receiving. If you’re still not convinced (my argumentative skills aren’t the best, I know) just try it out. I promise you will not be sorry.