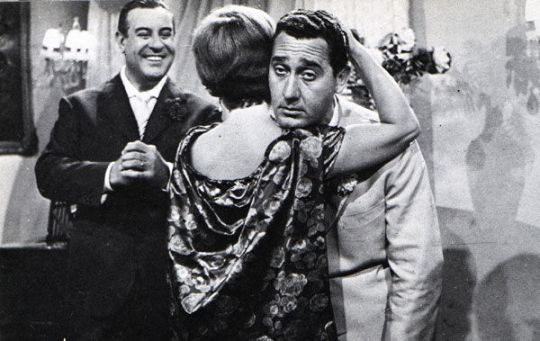 Alberto Nardi (Alberto Sordi) is an enthusiastic, but unlucky Roman entrepreneur trying to make it big in Milan. All of his business ventures seem to be busts, but he still hasn’t given up hope and keeps dreaming of becoming very rich one day. In the meantime he has only made a lot of debts and if it wasn’t for his wealthy wife Elvira Almiraghi (Franca Valeri) he would probably be insolvent and declaring bankruptcy. Other than financial interests, Alberto doesn’t seem to care much about his wife. One day, it seems that Alberto’s luck has finally come: His wife has died in a terrible train accident and he is going to inherit her fortune. What a happy ending, but wait this is an Alberto Sordi film: It never ends well!

Il vedovo (or The Widower in inglese) is a very likable Italian tragicomedy. Fans of legendary Italian actor Alberto Sordi, will be very familiar with the tone of his films, but in case you’re a novice it’s a subtle blend of humor and melancholy. Most of his films are quite funny, but there’s also something inherently sad about them. Il vedovo is no exception. While a lot of the humor comes out of Alberto Nardi’s bad luck and naiveté, after a while it is a little disheartening to see this man try so hard to succeed and continuously fail. And you really want him to do good. I don’t know, when people have financial problems in movies I always find myself very invested in the character.

I was also surprised by how good this movie looks. Of course it’s a Dino Risi film and he is no slouch, but it’s also Luciano Trasatti‘s sublime black & white photography. Trasatti is also responsible for the beautiful look of Federico Fellini’s I vitelloni (1953). Some of the transitions look a bit funky in this film, but hey, every decade has its own weird editing experiments, thankfully the weird fads fade away, only to be substituted by newer and even weirder ones (anyone seen an 80s movie lately?). The characters and situations are clearly larger than life in a film like Il vedovo, but that doesn’t mean that there isn’t room for realism or truth. While some plot points are fairly predictable, the film is mostly entertaining, so I’d still recommend it.