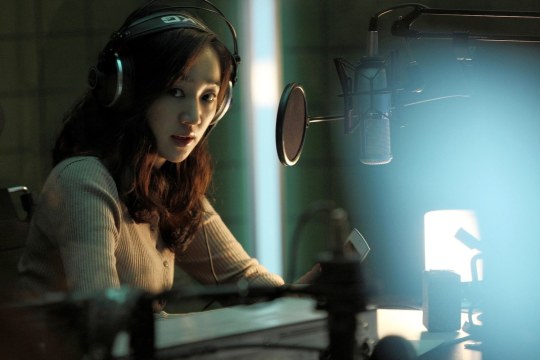 Ko Sun-young (Soo Ae) is a single mother who used to be a TV announcer, but then reinvented herself as a midnight DJ. Korean hombres love her delicate velvet voice and her passion for cinema and great soundtracks. Some of them “lover” her just a little to much. So much they become obsessed with her impossibly adorable persona and turn into some kind of raving psychos. The kind of deranged lunatics that break into your home with a fuzzy fur coat and a monkey wrench, tie up your sister (Shin Da-eun) and chase your cute, but mute daughter (Lee Joon-ha) all over your fancy apartment. Meanwhile Ma Dong-seok (Son Deok-tae), Sun-young’s stalker, is trying to help, but it’s not like anyone’s going to listen to a slightly overweight, awkward creep…

Midnight FM  (original title: 심야의 FM, pronounced Shim-yaui FM) is Kim Sang-man’s second film, this time he also co-wrote the screenplay, aside from directing. After doing an action comedy, he traded comedy for thriller and created something that is very reminiscent of what action auteur Tony Scott (RIP) used to direct. While the film might not be as visually frenetic as some of Scott’s craziest work, Kim Sang-man effectively captures the vibrance and energy of something like Man on Fire. Oddly enough, while numerous films, Martin Scorsese’s Taxi Driver in particular, are explicitly mentioned, none of Scott’s masterpieces is directly referenced. I must admit that while I love movies mentioning movies, in the case of this film I didn’t always get the point.

Han Dong-soo’s character, the villain played by Yoo Ji-tae, is where the film loses most of points. While Yoo does a fine job and is credible as the deluded Travis Bickle copycat (who thinks he’s somehow the hero of the story), the character’s motivations for setting up this complicated plot around his favorite radio DJ, somehow make no sense. I mean why does he have to convince her that he’s “the real rain washing away the scum from the streets”? What does she care? Besides why play games on the radio with her, while terrorizing her family, if he wants her to be like him? I’m tempted to say that it’s a Korean thing and I don’t get it or that something got lost in translation, but it just seems to be poor characterization.

It saddens me to even question if a film makes sense, because usually I don’t think in those terms, and rate emotion and entertainment value higher. With Midnight FM though, it’s just to big to overlook. The character’s motivations are the film’s foundation. The logic of the rest of the story depends on it, since they decided to tell the audience what drives him. Instead they could have just left it to the viewer’s interpretation not explain it at all, creating a mystery around his figure. If we ignore incoherent storytelling for a while though, and take a look at the film as a whole, I m must admit that it was pretty gripping. I felt very much in the scene with the characters, the ones that made more sense, and totally wanted to know what was going to happen next.

If a film can keep you glued to the screen for a hundred minutes, I think that’s a remarkable achievement in its own right. As I’ve mentioned, I do like what the film does visually. Kim Tae-gyeong‘s cinematography adds a level of enjoyment to where so many other similar genre entries look rather bland and uninspired. There’s also something inherently Korean about the way this film looks. It’s hard to describe or put my finger on exactly, but it has to do with the way the scenes are lit. Overall, I must say that I was pleasantly surprised by this film in. The few other films with radio DJ protagonists I can recall were all forgettable or bad. They only seemed focussed in making the DJ look cool, which of course made them seem obnoxious and annoying.

The character of Ko Sun-young (played by the wonderfully gifted Soo Ae) on the other hand, does not seem to be designed to be that. Yes, she does try hard to be charming and sensuous when she’s broadcasting, but then in “real life” she’s kind of a bitch sometimes. And I like that. The main character shouldn’t always be flawless. Guess what? We’re all human. Even good people do bad things. Empathy and sympathy for a character does not come from absolute perfection, but stems from whether a character is relatable or not. In that respect I think the film succeeds, because you really do want the main character to have a  “happy ending” and be reunited with her daughter.

So for all its flaws and shortcomings the film itself becomes somewhat likable and I can’t bring myself to dismiss it as bad. It’s an okay picture. Just don’t go in there expecting to see a lot from 4Minute’s Kim Hyun-a or Nam Ji-hyun. Yes, they make a brief appearance as “studio guests”, but it’s literally for a couple seconds and they don’t have any lines of dialogue either. It seems like a wasted opportunity to have KPOP idols in your film, but not giving them anything to do. Hyuna can be very funny, so I was looking forward to a joke or a little cute moment, but no: Nothing. Maybe they filmed it and it was cut out. If that’s the case, and they did it to benefit the film or the pacing in any way, I guess I can’t hold that against them either…