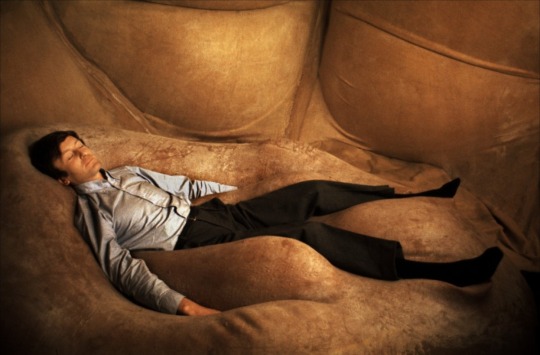 Claude Ridder (Claude Rich) is a young writer who recently attempted suicide, but failed miserably. Now, a mysterious organization wants to recruit him to perform some risky time travel experiments on him. He is the perfect subject, because if he died during the process, they could easily stage everything to make it look like a suicide. Everything’s ready. Claude (and a cute little white lab mice) will be sent back in time exactly one year and should stay in the past for one minute. After four minutes (no relation to the all-girl KPOP idol group featuring Hyuna) he can be released from the time machine and go on with his life. Unfortunately, something goes wrong and he keeps traveling through time randomly without ever coming back for more than a couple of minutes. Will he make it out alive? What’s hiding in his past? And why is that mouse traveling with him?

French auteur Alain Renais needs no introductions (Hiroshima Mon Amour, Last Year at Marienbad), while Je t’aime je t’aime is not on par with those masterpieces, it’s still an excellent and intriguing film. What I like about Renais is that he isn’t a pretentious director (something that can’t be said for a lot of his con-nationals). His influence is still strong today and can be seen in the works of directors like Michel Gondry. This film was very enjoyable, although confusing at times. The main character jumps back and forth in time, and each time we’re allowed to see only brief snippets of events that occurred in his life (possibly all in the spectrum of the last year). It’s a fun and original way to get to know the characters and tell the story. The actors are what make this film worthwhile, especially Claude Rich and Olga Georges-Picot, but the supporting cast is very talented as well.

The film brings up a lot of philosophical and ethical questions about our conception of time, but also science and the very meaning of human existence on earth. The good thing is that the film doesn’t take itself too seriously and is able to joke about its subject matter. Like every Alain Renais film I’ve seen so far it’s also a rewarding experience on a purely visual level, and though his black & white films look even more spectacular Je t’aime Je t’aime cinematographer Jean Boffety gives the movie a stunning look which is very reminiscent of Michelangelo Antonioni‘s work (especially something like Red Desert or Identification of a Woman). Speaking of Antonioni, Olga Georges-Picot does kind of look a little bit like Monica Vitti. Much like Antonioni, the last shot of Je t’aime je t’aime is very enigmatic and certainly leaves a lot open to interpretation, which I love. Definitely recommended.