I finally made it: I got to see Woody Allen’s Blue Jasmine! One of my most anticipated films of the year. It was my first time watching a Woody Allen film in a theater. I’ve only discovered this fantastic filmmaker in 2011 when I watched Midnight in Paris an experience I’ll never forget. So anyway, that was the highlight of my week, in terms of movies, but there were also two others I’d like to discuss.

Ang Lee is one of those directors I should get more into. It seems that everyone loves his films and while I can certainly see why, for some reason I never really love them as much as everyone else. I can’t connect somehow. Lust, Caution is probably my favorite of his so far. I mainly checked it out because it won the Golden Lion at the Venice Film Festival. To me there are three “authorities” when it comes to cinema: The Criterion Collection, Sight & Sound and the Venice Film Festival. I will literally believe and watch anything they praise. This film reminded me a lot of Wong Kar-wai, one of my very favorite directors, mostly because of the beautiful dresses, Tony Leung and some of the themes explored (namely the lovelorn/tormented characters). There’s a lot of political stuff going on in this film, most of it probably flew right over my head, I could still enjoy it on a surface level. I’m not interested in politics, but I really should get interested more in other countries history. Lust, Caution is beautiful to look at, Alexandre Desplat‘s score is quite simply amazing and the actors are fantastic especially Tang Wei and Tony Leung. The film is about a theater crew who wants to kill an important political figure. I alway like movies that comment on acting or film, so there was this added element I appreciated, even if I’m sure there was a lot about this picture that is culturally relevant. Very recommened. 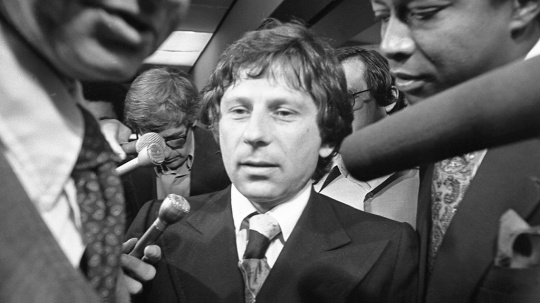 Don’t worry/Sorry, this film is not in black and white. Roman Polanski Wanted And Desired is an HBO documentary on one of the best filmmakers of all time: you’ve guessed it, Roman Polanski and more specifically the sex-scandal he was involved with in the seventies. The Polish auteur was accused of raping an thirteen year-old model he was photographing at Jack Nicholson’s house on the Hollywood Hills. It’s a very upsetting story. On one hand of course I love Roman as a director, his films are fantastic and he seems like a fun person. On the other hand you just can’t condone a crime like pedophilia (consensual or not). The film almost seems to be taking Polanski’s side “too much” in certain parts. Separating the artist from their art is important, even if it can be conflicting. What he did was wrong. He says he regrets it, but does he actually regret it or does he just regret getting caught and all the troubles that came from it? Obviously, it’s not up to me to judge.
A lot of people have treated him unfairly during the process, even the victim’s lawyer agrees. It’s sad that many people who are not into cinema are likely going to remember him rather than his great art. To me art is always more important, however when it comes to auteurs, their personal vision in films is important and of course that comes from their personal life experience. So I guess that the separation of art and artist is more of a theoretical concept. As strange as it sounds it was still good to see people like Mia Farrow and Polanski himself, and hear them recounting anecdotes about the film industry. It’s an interesting documentary, even if I sometimes question the filmmaker’s point of view.