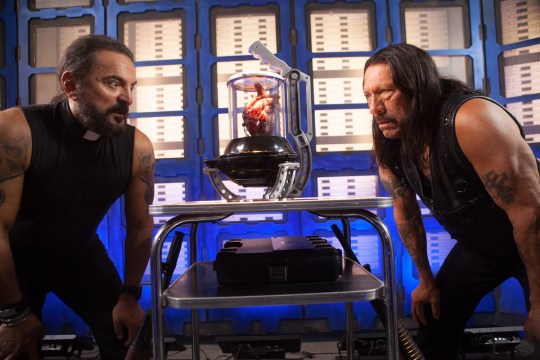 Machete Cortez (Danny Trejo) is on an intergalactic mission in space doing what he does best: Slashing bad guys, bedding gorgeous hispanic chicas and just being an all-round badass.
Back to earth, before all the space stuff, Machete and Sartana (Jessica Alba) are attempting to capture crooked US military supplying the Mexican drug cartel. The mission goes terribly wrong and Sartana is killed. Machete is taken prisoner by some evil American vigilantes, who want to slowly torture him to death. Fortunately, Machete’s thick skin saves him, well that and the fact that the president of the United States himself (Carlos Estévez aka Charlie Sheen) wants a word with him. Machete is sent on a mission to save Washington D.C. from a schizophrenic Mexican revolutionary who wants to bomb the American capital. In the process he finds out that maybe the real bad guy is a guy named Voz (Mel Gibson) who plans to destroy the earth and flee to space.

After thoroughly enjoying and defending Robert Rodriguez‘ first Machete film multiple times, I was sorely let down by Machete Kills. This sequel lacks everything that made the original so great and likable. The characters are reduced to their own lowest common denominator and new ones fail to make a lasting impression. Machete is reduced to a series of one-liners of him speaking of himself in third person (“Machete don’t _”). The characteristic and recognizable visual style and flair of the director is nowhere to be found in this generic and almost made for TV looking film. Oddly enough this is the first Robert Rodriguez film where his signature style is completely absent (aside from when he didn’t have a signature style of course). The humor falls flat most of the times. The story is convoluted and makes little sense, which would be fine if Machete didn’t suddenly receive a this quasi slasher-esque immortality, which is usually reserved for franchise villains.

The film starting with the faux trailer for a possible sequel to Machete Kills was a mistake. There’s a good reason for why Marvel has the “tease” for the next film at the end of the film. It’s because otherwise the whole film becomes some sort of a hypothetical prequel to a film that doesn’t even exist yet. It makes no sense whatsoever. Also, it would have been funnier and made more sense at the end. Never mind that however, there are enough flaws in this movie to go on for days, which is again unfortunate because I happen to be a fan of Robert Rodriguez and all the talent involved in this film (minus the ever-annoying Sofia Vergara). If I had to praise the film for anything it would have to be the cast. Among the new comers Amber Heard gave an especially notable performance, although seeing what she was working with, i.e. a disastrous script, there wasn’t much she could do to save this movie.

Nobody could save this movie as a matter of fact. Not with an uninspired script like that. While the first Machete felt fresh and new to a certain degree, at this point the concept is just tired. It was as if Rodriguez wasn’t even trying, as if he directed this film on autopilot or as if an impostor made a bad fan film. Even with all the bad things I needed to get off my chest though, this is still a Robert Rodriguez film and while certainly one of his worst it’s still fairly entertaining. Not being an action film aficionado to me whenever a genre film manages to keep my interest or at least not completely bore me it has achieved something. While this giant jumbled mess of incoherent screenwriting and unstylish directing I still found myself somewhat engaged or at least compelled to finish the film.

Not much else I would like to add. I was let down by Charlie Sheen’s performance, he’s usually automatically funny to me, but apparently they managed to take the joy out of him too. Some of the CGI was pretty terrible. The sets looked like bad Spy Kids leftovers and some backgrounds/locations were just too cartoony even for Rodriguez’ standards. Everything is even more sad and depressing when you consider that they worked with a budget twice the size of the first film. All in all a big let down, with still some degree of entertainment value. If it wasn’t Robert Rodriguez I feel that I would be even harder on this film, but since it’s him and a cast of lovely and likable people I’ll restrain myself. At this point, since Machete Kills underperformed at the box office and received a lot of bad reviews, it’s unsure if we’ll ever see a third film. Hopefully his next project will be something he truly cares about and wants to do.