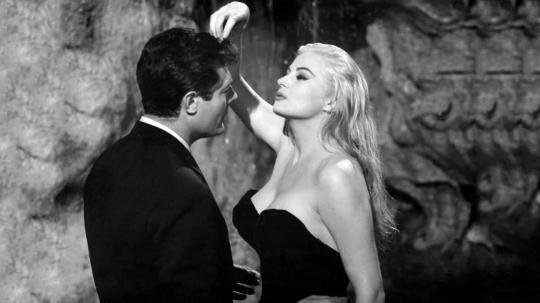 Marcello Rubini (Marcello Mastroianni) is a paparazzo journalist drifting through Rome, trying to catch the latest scoop and make a living with a job that doesn’t entirely satisfy him. As an aspiring, but rather uninspired writer, he finds himself thorn between what he would love to do, but can’t and what pays the rent. While his job can be exciting and thrilling, he gets to meet celebrities and visit all kinds of places, he just seems to be bored with all the shallow mundanity and the emptiness of the words he writes. On the surface he has no reason to feel this way: He has a steady job that pays well, his girlfriend seems to genuinely care for him, he has many friends and knows all the right people. However something is missing in his life. Nothing feels real. It’s all a big circus with and when the night is over and the sun rises over the Roman hills he is alone, misunderstood and lost.

Federico Fellini is my favorite director. He has made more of my favorite films than any other director. His ability to understand and portray life, human beings and emotions never ceases to amaze me. La DolceVita to me is his masterpiece. The coronation of everything he had done in his career up to that point. This film revolutionized cinema forever. To me it’s not just one of the most important films ever made: It’s the most important film ever made. It encompasses every single aspect of the human condition and is about as broad in its thematic explorations as life itself. While the story is only about a week in the life of Marcello, it feels as if it’s about his entire existence. Many films have one or two scenes that really stick out and you’ll always remember: La Dolce Vita is filled with amazing scenes each more beautiful than the other.

Marcello Mastroianni was born to play the role of Marcello. He seems to effortlessly embody the character by simply being. As redundant as it may sound Marcello is Marcello. The character of Marcello is that of an unaffected, detached and possibly depressed man, who sleepwalks through life. He has no idea where he’s headed and why. He just doesn’t seem to care anymore. Everything feels empty and meaningless to him. What’s the point? Secretly however, he seems to be longing for something more. The thing is he doesn’t know what it is. Sometimes a little glimmer in his eyes, a spark of hope appears and he seems to know exactly what he wants. Then, just as it mysteriously appeared on his face it fades away. Is he content with where he is? Does he care that he’s hurting the only person that seems to genuinely love him? Is it too late for him to try to be a better person? Fortunately, Fellini doesn’t try to present a clear-cut answer. Instead he’s much more interested in making his character sympathetic and relatable.

Like every Fellini production La Dolce Vita feels like a giant traveling show made of the most peculiar and unique faces. Nino Rota‘s score once again helps set the tone and transport the viewer into the crazy dream-like world Fellini envisioned in his mind. Otello Martelli, who was Fellini’s cinematographer up until that point, shoots one of the most beautiful, gorgeous, stunning black and white pictures ever (especially if you’ve seen the restored version or the original). Even when there isn’t much going on narratively, Fellini is hard at work to enthrall your senses with incredible sounds and visions. Every aspect of the mise en scène is pompous and extravagant, yet still in good taste. Arguably, Fellini often boarders the line with sensory overload in his movies, in La Dolce Vita however things aren’t nearly as extreme as in some of his later color works. This film is a transition for the director from works that could be described as neo-realist to something that is art film in its purest form.

La Dolce Vita is one of my all time favorites films. It has everything I look forward to in a movie. I also automatically link it to another favorite of mine, Sofia Coppola’s Lost in Translation, which not only features extracts of La Dolce Vita with Japanese subtitles, but also greatly inspired the film. Of course Sofia isn’t the only one being inspired by the legacy of this film and Italy’s greatest auteur. Cinema being one of the most self-referential arts and me being a cinephile, I get incommensurate pleasure out of little nods and references. That’s also one of the reasons I keep returning to this film. As an Italian works of art like La Dolce Vita and the works of Michelangelo Antonioni are part of my identity. They’re more than movies. They’ve shaped the way we think, the way we see our country, the way we view art, people and of course cinema. Life might not always be sweet, but films like La Dolce Vita are able to make you forget some of the pain and bitterness. Even if it’s only for three hours.