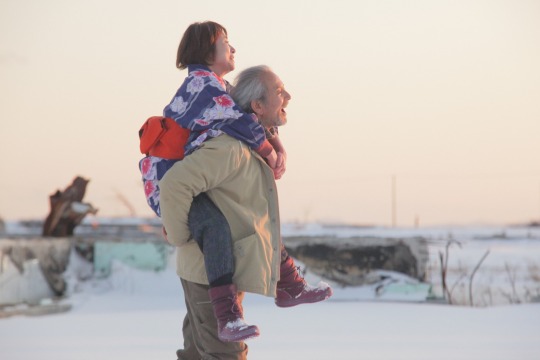 The Ono’s are a humble family of farmers living in rural Japan. One day there is an earthquake which causes a disaster in the local nuclear power plant. Everyone is afraid of the consequences of radiation on the local population. The Ono family lives just on the 20 kilometer radius border, where the authorities have established there is no “officially” no risk of contamination. They watch their neighbors being brought away into some a provisory facility away from their hometown. Yoichi ono (Murakami Jun) wants to stay with his father Yasuhiko (Natsuyagi Isao) and mother Cheiko (Ohtani Naoko). However Yasuhiko advices his son to move away from the contaminated area, with his wife Izumi (Kagurazaka Megumi) and start a new life elsewhere. Yoichi says goodbye to his parents and moves to a nearby town that is supposedly safer, but when Izumi discovers that she is pregnant she becomes paranoid about the radiations possibly hurting her unborn child.

Sono Sion’s The Land of Hope (original title: Kibô no kuni) is a moving drama inspired by the real-life events that happened in Fukushima back in 2011. Sion is mostly known for genre films such as Suicide Club, Strange Circus and Cold Fish, however this isn’t the first time the poet turned director dabbled in the art of making serious and touching character dramas. He has proven his skills as a sensible director with Be Sure to Share and Himizu. With The Land of Hope Sion shows a softer side, while trying to make a very clear statement about atomic energy. The film shows how the use of nuclear power is far from safe. What happened in Fukushima could happen again, and Japan is a small, but densely populated island. In the film, much like in reality, the disaster is contained, but Sion shows how nobody is really safe from radiation in such a situation.

What I loved about The Land of Hope was that it focussed on one family (and neighbors) and showed how the event affected their relationships. The nuclear disaster brought their real feelings for each other to the surface, feelings they probably wouldn’t have expressed for each other in “normal” circumstances. It also made them re-think their values and emotional attachments. Personally, I feel that Sion is a master at showing human interaction and small character moments, their impact and meaningfulness. Some scenes were very powerful and made me tear up, I’ll admit it. In true Japanese fashion of big emotional dramas the melancholic Spielbergian score certainly helped and manipulated the audience to a certain extent. However the excellent performances and the grounded script never made the film feel cheap or cliché, but always good-hearted and sincere.

As with every Sono Sion film I’ve seen so far, the drama is always powerful and impacting me long after I’ve finished the film. I feel the same way about The Land of Hope. You never forget a Sono Sion film. Being a poet Sion’s expression of feelings easily overwhelms the audience which isn’t used to feel and connect as deeply as the artist. I appreciated that the film still remains realistic and doesn’t become overly “Japanese”, by that I mean that it manages not to become to sappy and schmaltzy. While Sion is regarded as a romantic and “warm” director, in this film he doesn’t over do it, much to the film’s benefit. Aside from a side tracking storyline with the neighbors that doesn’t really payoff in terms of storytelling, the film is solidly structured and constructed. If you took out that storyline it would have had a better run time. Still, at over two hours, this film is never boring. Then again Sono Sion’s epic romance Love Exposure is 4 hours long and there’s never a dull moment in that one either.

A lot of credit for that should go to Itô Jun’ichi editor and long time collaborator of the director. Not only is Sion a master of pacing, but he’s also great with writing dialogue, which his amazing cast delivers more than convincingly. I really wish he would write and direct a romantic comedy one day, because I know he could do it, even if it might look odd on his resumé of weird and unusual films. One last thing I’ll mention about the film is its aesthetic look, which fits in the whole tradition of Japanese dramas from Kurosawa to Ozu. In that case the credit goes to a lot of people behind the camera such as Miki Shigenori (cinematography), Matsuzuka Takashi (art direction), Honda Mariko (make-up & hair) and Arai Masato & Kawasaki Kenji (costume design). A lot of those technical aspects of filmmaking easily tend to pass unnoticed or be forgotten when discussing a drama, but if the film ended up feeling as beautiful, realistic and honest they absolutely need to highlighted.