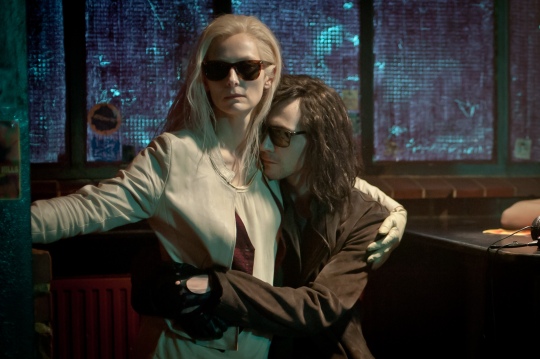 Spoiler Alert
This is not a review, but a spoiler filled discussion of Jim Jarmusch’s Only Lovers Left Alive. If you haven’t seen his newest film starring Tilda Swinton and Tom Hiddleston I suggest you check it out first and then come back. Unless you don’t care about spoilers, but then you probably wouldn’t have much of an idea of what the heck I’m talking about. Anyways, thank you so much for reading and do leave some feedback if you feel so inclined.

Last night I got the chance to check out Jim Jarmusch’s newest film Only Lovers Left Alive at the Zürich Film Festival. Unfortunately the host for the night, the woman who introduced the film to the audience, seemed completely ignorant about cinema, the vampire sub-genre and the story of the film. I wanted to stand up and slap that bitch in the face. Fortunately, I was too comfortable in my VIP seat to make a fuss about it and risking to be expelled. So then the lights went out and the film started. I was very excited. Throughout the film however I realized that a simple review wouldn’t be enough to discuss some of the themes and thoughts that I kept having, so I decided that an essay would be more apt.

In this essay I will discuss how Only Lovers Left Alive fits in with America’s most iconic indie director Jim Jarmusch and his body of work. I will also attempt to guess why he made this film and what it could mean for his career. Then I will focus a bit on the vampire sub-genre and see what the film does differently and where it falls in line with previous explorations of the bloodsucker mythos. In a more ambitious chapter I will try to analyze the film’s message and philosophy or answer the question: What was Jarmusch trying to say with this film? Afterwards I tie everything up and you can go home and eat some ice cream. Or maybe you’re already home and eating ice cream. In that case you can do whatever it is you do after you ate some of that delicious ice cream. 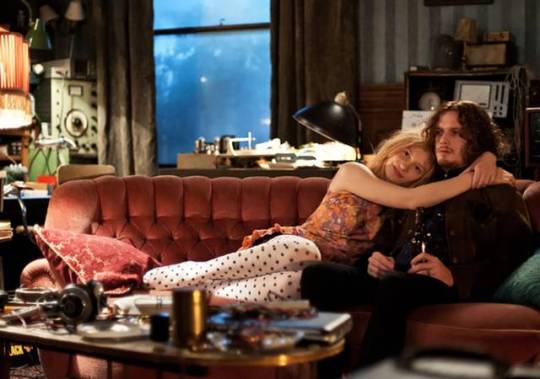 The film fits in with Jarmusch’s catalogue in the sense that it is essentially about the same themes and people who continuously pop-up in throughout his body of work: The lonely, melancholic, disenfranchised and introverted punk rockers. The only difference is that in this film the characters are slightly more successful and have access to money, although in the end that doesn’t help them that much. Oh, and they’re also vampires. What Jarmusch does with the vampires however is interesting, because he uses them as an “excuse” to become rather preachy and make some fairly misanthropic remarks, but more about that later.

Stylistically Jarmusch has smoothly transitioned from beautiful, bright black & white photography to gorgeous lush, color imagery. This film is probably one of his most visually refined (of the color ones) and is definitely a step up from his 2009 film The Limits of Control. For me personally that film felt like a weaker effort on the director’s part especially in terms of pacing and storytelling, but also considering all the great films in his filmography. It is also one of the director’s least accessible films and one of his least successful financially. With Only Lovers Left Alive Jarmusch decides to “strike back” and make what I would say is his most accessible film to date. Sure, there still are a lot of references to obscure personalities of the art and science world, but the familiarity of the vampire sub-genre helps creating an environment which everyone can immerse themselves in. It also helps that the editing is a lot brisker. Well, for a Jim Jarmusch film anyway.

One of the film’s strongest points is the score, from minimalist Dutch film composer Jozef van Wissem. Definitely worthy of Oscar consideration, apt in creating the film’s mood and underscoring the main character’s personality. It makes sense that a lot of work and attention was put into having a killer score, because the main character of the film is a somewhat successful underground musician. Music is a big theme in the film, actually bigger than it might appear on the surface. Another interesting artistic decision was not to show any sex scenes, but rather only shots of the couple laying in bed together. The picture of the two main characters laying together naked is much more effective, artful and tasteful than watching the two fucking each others’ brains out. It also helps that both Tilda Swinton and Tom Hiddleston are more than good-looking. More importantly aside from being easy on the eyes, both turn in some great performances, especially Swinton. The supporting cast stands out as well, particularly the lovable, rugged and dying vampire John Hurt, the funny, awkward and cute Anton Yelchin and the vivacious, energetic and equally magnetic vampire temptress Mia Wasikowska.

The first vampire film dates back to F. W. Murnau’s Nosferatu (1922) and since then there have been hundreds of films about the creatures of the night. Most of those were just forgettable entries to a saturated sub-genre, that grew more and more tired, but never seemed to die off (much like the creatures themselves). The lack of innovation and a whole bunch of me too films is what makes most people groan today when they hear about a new vampire flick. My friend’s reaction when I told him I was excited for this film was “Really? A vampire film? How original”, can’t blame him. However we are talking about an auteur here and if Jim Jarmusch decides to give his take on the Phantoms of the Night I’m certainly interested (to say the least).

Aside from bringing his charming, quirky indie sensibilities to the picture Jarmusch also tried to show us his view of modern 21st century vampires. These vamps have updated themselves. Swinton’s character is using an iPhone, Hiddleston’s is a bit more nostalgic, but still both live in modern homes, drive cars and know how to use technology. They also don’t just go out and kill people, because they prefer to buy blood from hospitals, not necessarily because of moral issues, but because it’s easier and not so messy. Garlic and “having to be invited into one’s home” are shown as vampire superstitions, and the V word is never used. There are also no religious aspects, but rather the absolute lack of religion in this film, which was certainly a deliberate choice of the director.

Similarities with other vampire films are that they have fast reflexes, get high on blood (blood is portrayed very much as a drug) and they seem to be able to love much deeper level. They’re also able to communicate telepathically and through dreams. It is interesting however how all these fantasy elements are integrated in the film without making the creatures seem supernatural or otherworldly. Somehow the film manages to stay “rational” and grounded into reality. My favorite part of the whole vampire aspect is that they are shown as smart and cultured, old beings. Having lived for centuries they had time to study languages, read many books and visit a lot of different places. In most vampire films they are shown as sex-crazed party animals, and Wasikowska’s character easily falls more in that camp, but the two protagonists are “old souls”, they have manners, they think about things and don’t seem dominated by their animalistic impulses (another good reason not to show a sex scene). 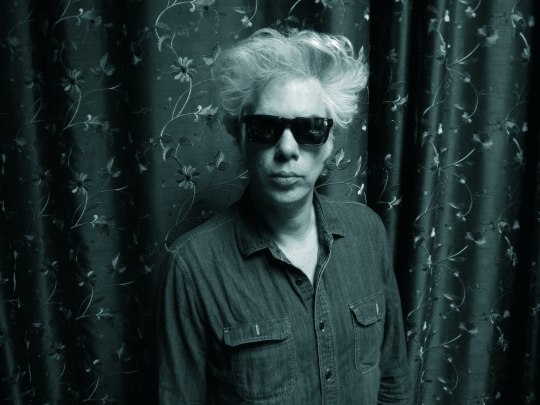 As I’ve mentioned the two vampires tend to have deep philosophical conversations and basically it’s just another way for Jarmusch to make statements that would come of as annoyingly judgmental if made by humans. Hiddleston’s character refers to the humans as “zombies”. What does he mean by that? It isn’t commented on explicitly in the film, but basically it means that most humans are like sheep, they believe whatever media tells them, they don’t learn from history and they dismiss great scientists as crazy people. Vampires on the other hand benefit from having a global, great picture look of history and are thus able to see things differently. They see humans making the same mistakes over and over, throughout history and unable to predict that history will repeat itself.

Jarmusch unsubtly comments on how we could have solved our energy problems, if we had listened to a fellow named Nikola Tesla and how the next war is going to be about water. However we won’t see it coming until it hits us. Oil, water, natural resources: Humans are just as evil as vampires. We will kill our own kind for oil. Vampires at least have no choice, but we as humans do. This is a particularly interesting thought to me, because this way the humans actually become the “bad guys”, while usually we see the vampires as evil, damned and soulless creatures. This all might sound very misanthropic and maybe it is, but it is worth noting that men (in the sense of mankind) is responsible for most of the bad things in this world.

Like I said, religion or religious themes are never thematized by the film, except when Hiddleston’s character indirectly criticizes Christians for not abiding to Charles Darwin’s Theory of Evolution. Based on that remark and the fact that God is never mentioned I deduce that in Jarmusch’s world there is no God. The film seems to be taking an existentialist point of view in which each individual decides what their meaning of life is. For Hiddleston’s character it’s his music and his wife. For Swinton’s character it seems to be literature and her husband. Basically, whatever gives you some sort of relief from the pain that comes from living.  It is interesting to note that the two main character are named Adam and Eve as if Jarmusch is suggesting that they are the first new kind of “people”, the only lovers left alive.  Maybe Jarmusch is saying that we need a radically new way of thinking, based on science and what makes us feel good and he’s (ironically) tried to create them, much like God did, only not in flesh and bones, but film.

Only Lovers Left Alive is a much deeper and interesting film than what it might appear on a surface level, bringing up some very interesting and relevant philosophical issues, that I am not really qualified to talk about. I tried to at least mention them in hopes that someone more knowledgable can develop these thoughts more thoroughly. It is a stunning looking, masterfully directed film, with great performances and a fantastic score. There are many funny jokes and little character moments, although some of the humor gets a bit tired and repetitive after a while. Still, this is a great romantic film that serves more as a “day in the life” of vampires as they contemplate the imminent end of their own species and how misunderstood they are. Even if the Academy most likely won’t recognize the film’s genius, we certainly hope that it will help people give the vampire and horror genre a second chance.

That is all my dear friends. I hope you are still reading this.
From my zombie-free apartment: I am your Professor Davide Perretta.
Signing off. Goodbye!