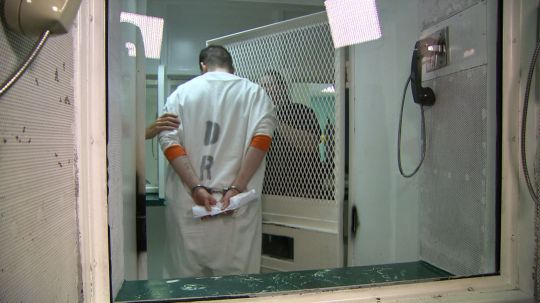 Into the Abyss portrays Michael Perry, a young man on death row for the murder of a fifty-year-old woman and was possibly also involved in the killing of two other people. Perry was sentenced eight days after German filmmaker Werner Herzog interviewed him. Michael denies his responsibility of the crimes and accuses Jason Burkett, who was also involved received a lesser life sentence. Herzog interviews all the relevant people involved in the case and the execution of Michael Perry. While clearly stating that he is against death penalty and is sympathetic to their situation, he doesn’t deny the horrible nature of the defendants crimes. As he puts it himself  “I don’t have to like you, but I respect you, and I don’t believe human beings should be executed”.

After presenting the case, the evidence and the opinion of authorities, Herzog goes on to interview people about their feelings towards death penalty, their life choices and basically how they view life and being human in general. His questions are always very poignant and always mange to get right to the point. Some of the interviewees break down crying, others seem to have realize things about themselves and life they never knew, others still are given a lot to think about. Nobody is unaffected by Herzog’s visits. There are some genuinely heartbreaking moments. He is able to show every person’s humanity, but at the same time what he seems more interested in: Madness. After watching Stroszek my brother commented: “There’s not one single sane person in that movie” and that can be said for more or less every Werner Herzog film.

After Into the Abyss Herzog went on to make a TV series called On Death Row, which is basically a continuation of this documentary. I can only guess that he was deeply affected himself by what he found out. There is just something inexplicably scary and yet fascinating about the subject matter. Feeling very strongly against capital punishment myself, I appreciate Herzog’s approach. He himself stated that he is not a fan of cinéma vérité, that means he believes the filmmaker shouldn’t be neutral and that a documentarian shouldn’t just list facts. The truth doesn’t exist anyway. Even if there’s no staging or fiction in Into the Abyss it is still a very cinematic experience. The film has a score, the cinematography is subtle, but distinct and beautiful in its own way and he himself is the narrator. Like with every Werner Herzog film I laughed and I cried, but knowing that a story is true impacted me much more than any work of fiction ever could.

This film goes right at the heart of human nature like nothing else I’ve seen before. It’s frightening, but at the same time it’s real. The people in this film certainly have done some inexplicably bad things, but they remain human beings. Herzog treats every one of his interviewees as human beings. He gives everyone a chance to explain themselves. While talking to Herzog some of the people seem to realize how absurd their beliefs sound when expressed out loud. Sometimes silence speaks louder than words, just the look on people’s faces, the way they say things, their mannerisms. Yes, they know there is a camera on, but there are some moments where we seem to be allowed a glimpse of real person reflected back at us.

Herzog manages to capture the essence of the human heart, the core of the people he talks to. It’s in his intuitive, instinctive approach. It’s his charming German accent. It’s his calm and soothing voice, but most of all it’s his honesty. I was truly amazed by this film. It’s beyond words sometimes. The atmosphere of this film is heavy, but very rewarding in a weird way. Herzog gives its public a lot to think about. What is the meaning of life? How do people become what they become? How in the world does death penalty make any sense at all? As Herzog says himself, it’s very “old testament” (eye for an eye), but as he boldly states (and I can only agree): “I’m pretty certain that Jesus would not have been an advocate of capital punishment.”

Rating on First Viewing
(on my laptop)
9 out of 10