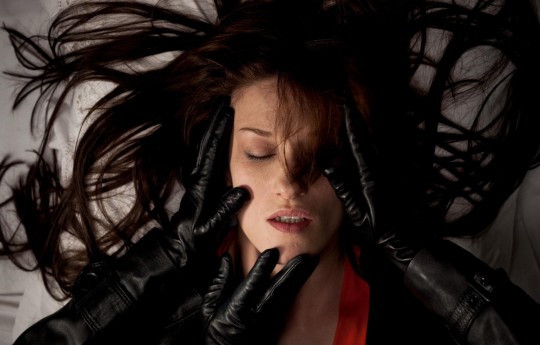 Dan Kristensen (Klaus Tange) returns home one day and discovers that his wife Edwige has disappeared. Dan starts investigating Edwige’s disappearance and the strange and mysterious places and people of his apartment complex. Did she leave him? Is she dead? Also, what the hell is going on with his creepy neighbors? Of course the police can’t help him, they just don’t believe him. Soon his search and obsession cause him to descent into a world of madness. Fact and fiction become harder to distinguish. Dreams and nightmares intertwine with reality until they become one and the same. Will he ever find his wife’s killer? Is there a killer? Who’s the killer?

Written & directed by Hélène Cattet and Bruno Forzani The Strange Color of Your Body’s Tears is a natural progression from their ‘ABCs of Death’ segment O is for Orgasm. The similarities aren’t only on a surface level (cinematography, editing), but also on a thematic level, L’ètrange couleur des larmes de ton corps (original title) represents both an evolution and maturation for the two auteurs. Not only is this a very entertaining and visceral film, but it’s also a complicated, surreal story. The narration is anything but linear or straightforward. Forzani explained that they are both inspired by the Italian Giallo, but also by Satoshi Kon. Cattet also cited Brian De Palma as an influence.

The characters in The Strange Color of Your Body’s Tears have a way of relating to the space around them reminiscent of Michelangelo Antonioni’s work (namely L’Eclisse). The ’70s score, borrowed directly from Italian films creates a playful, but at the same time scary mood, while the loud sound mixing and the entrancing imagery enable the viewer to be transported into the film’s world. Even if the story is anything but clear on a first viewing, the film is always interesting to watch and experience on a purely sensorial level (much like a David Lynch film). Like Amer, this film more than just a love letter to Italian cinema, it’s a work of art that stands on its own. There are throwback qualities to it, but the film works for a modern audience as well.

What I appreciated and take away most from complex films like this one are the cinematography (à la Tutti i colori del buio), the tone and atmosphere and the fantastic soundtrack. While it loses some of its pace in the second act, it returns with a fury in the last act, with flashbacks, black & white sequences (with an altered frames per second rate) and all sorts of violent crazy stuff happening. It is a very re-watchable film, especially because it’s difficult to fully understand on a first viewing (or ever?). I was a little bit let down by the poor character development in the film, though I realize that wasn’t the film’s intent or goal, still I like to have relatable characters beyond their physical appearance, accent and attire.

Personally, I’d say this is a step up from Amer and so I can only be excited for anything the two will do in the future. I recommend this film if you enjoyed previous work from Cattet & Forzani, you like the films or directors I’ve mentioned or just want to try something new. This is definitely a film best enjoyed in theaters (even if people walking out are annoyingly distracting), if you watch it at home make sure you have a good sound system: That’s how the directors intended you to view their picture.