This weekend Adam Sandler’s follow-up to the horrible and painfully unfunny Grown Ups will be released in theaters. Based on how terrible the first film was and judging by the trailer for this sequel I can, in good conscience, advice you to stay away from it. I’m not sure if  Pacific Rim is any better, but it got a Fresh rating on Rotten Tomatoes, so it’s officially socially acceptable to like that movie (unlike Transformers). Anyway, we’re not here to talk new releases, although you should absolutely check out Thomas Vinterberg’s Jagten (English title: The Hunt) starring the amazing Mads Mikkelsen.

Any-who! This is a short list of five films is about young adults still stuck in the adolescent phase, not wanting to grow up. I personally feel like that sometimes, so this is a subject close to home and certainly one of the movie topics that fascinates me most currently. I even started watching the aptly named television show Arrested Development and it’s the only thing on TV I watch right now, and I can certainly recommend it if you’re into all that.
So in (dis)honor of Grown Ups 2 here’s a list of my Five Favorite ‘Arrested Development’ Films. This week I don’t feel like ranking them, so I’ll present them in chronological release date order. 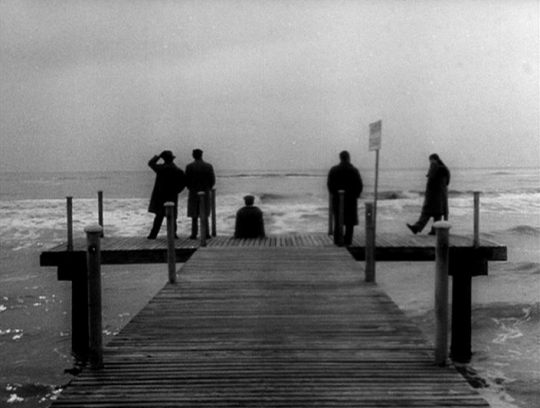 5. I Vitelloni (1953, Federico Fellini)
If you thought this whole “arrested development” discourse was something new, think again. Federico Fellini was already sensing it in the fifties, I guess he was way ahead of its time in a lot of ways, but like most of his films they’re still very topical even today. I Vitelloni is about a group of young adults in a small town in Italy trying to figure out what to do with their lives. In typical Fellini fashion there are happy party scenes and then sad and melancholy moments of reflection at the beach. Besides being a funny, yet deep film, I Vitelloni went on to inspire contemporary filmmakers from Martin Scorsese to Sofia Coppola, so if you like any of their films at all you owe it to yourself to check out I Vitelloni.

4. Being There (1979, Hal Ashby)
This one might be a bit of a stretch. One could say that Chance (Peter Sellers) is a big kid, afraid to go in the real world, but he also might be suffering from psychological problems. Then again one might say that adults stuck in adolescence almost certainly have issues in their past they need to resolve. Anyway, aside from the very ending (the “gag reel”) I love this film. It’s Peter Sellers, it’s funny, charming, quirky and  deeply moving. This film is about so many issues our society is currently still trying to resolve. It’s been a while since I’ve seen it and it’s definitely due for a re-watch, but if memory serves me correctly it’s also gorgeous to look at.

3. The Darjeeling Limited (2007, Wes Anderson)
Considered by many Wes’ worst film, I actually think this one is underrated and not even half as bad as most people say. In a lot of ways almost every Wes Anderson film has characters “trying to grow up”, but this one especially is about these three brothers trying to figure out their lives and how their family fell apart, while on a train trip in India. It has Wes’ signature humor, cinematography and cast. Co-written by Roman Coppola, this small gem of a movie is actually my third favorite of his, behind The Royal Tenenbaums and Moonrise Kingdom.

2. Somewhere (2010, Sofia Coppola)
I’ve already mentioned her, I always do, but Sofia Coppola’s Somewhere is about a young actor who is bored out of his mind after the shooting of a film. Looking at the larger implications of it, he is also very dissatisfied with his life. Why? Because he is very detached from everyone. He has alienated the people who love him and people can’t love him, because he doesn’t love himself. Also, who do you trust in the film business? This film is about loneliness and trying to connect, oh and while there’s no Wong Kar-wai and Michelangelo Antonioni on this list, they’re certainly worth mentioning because they inspired Sofia and discuss some of the same themes. If you haven’t read my review of Somewhere yet and you want to, by all means please do.

1. Young Adult (2011, Jason Reitman)
Directed by one of the most interesting American indie filmmakers and written by one of the most talented and exciting screenwriters Diablo Cody, Young Adult is one of my favorite films in recent years. Charlize Theron gives an Academy Award worthy performance, and that was a great year between her and Kirsten Dunst in Melancholia: Who won the Oscar again that year? ‘Cause I’m pretty sure these ladies were robbed. Oh, I bet the Weinsteins were involved! #mafiosi! Sorry, I couldn’t resist. Returning to Young Adult it’s a fairly depressing, yet darkly funny film. The cinematography might seem unspectacular on a first viewing, but it’s so subtle, I caught it’s genius only on a second viewing. Hats off: Eric Steelberg did a career best job on this picture. Who won ‘best cinematography’? Just kidding (kind of). But no, this is a great film and it’s tough to summarize it in a couple of sentences, but expect a full review as soon as I re-watch it.

To round-up the discussion.
These are all ‘dramedies’, that is dramas with comedic elements to them. Far from Grown Ups, and this is the last time I’ll mention that abyssal film, I promise. What do they have in common besides that? Well, since I’ve picked those out, they all look great and they deal with their characters in a respectful, non-judgemental way. They have a sense of irony and wit, but they never make fun of the characters or look down on them. That’s precisely why I like them: They don’t offer ready-made solutions to life’s problems, but they also don’t shy away from discussing some topics that most filmmakers would be uneasy discussing, and thus would either trivialize or treat superficially.