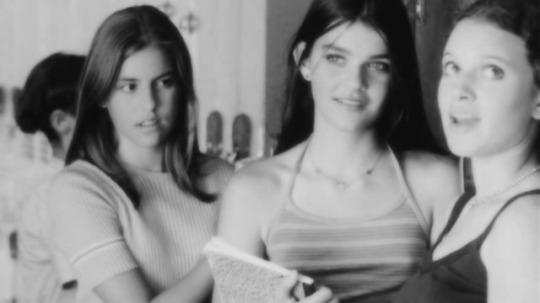 Chloe (Audrey Kelly) is the school’s ‘queen bee’ obsessed with Virginia Andrews’ Flowers in the Attic. Bored with school and somewhat annoyed with the immature boys her age, she and the girls in her clique start scheming something strange. Lick the star is the name of their ‘extra-scholastic’ project involving the boy’s lunches, rat poison and raw eggs. However before Chloe is able to carry out her evil plan some false rumors about her are spread around school. All of a sudden she’s not the ‘superstar’ anymore, but the one being bullied. Sick of being made fun of, she decides to go the melodramatic route trying to end her life.

Shot in 16 millimeter crispy clean, beautiful bright black and white by Lance Acord, that went on to collaborate with Sofia Coppola more notably on Lost in Translation and Marie Antoinette; Lick the Star is Coppola’s first ‘solo’ director credit. Many of Sofia’s directorial and writing trademarks and themes are already present in what’s only her second short film.
Just like with every feature film, Sofia has consistently experimented with different visual styles to fit her stories. Working and casting friends and family, her brother Roman behind the camera, her cousin Robert Schwartzman in an acting role and Zoe Cassavetes in both, this working approach reinforces the notion that all of Sofia’s films are passion projects.

It’s her thoughtfulness and attention to detail that makes them so enjoyable and endlessly re-watchable. It’s all in the little, exquisite touches: Like shooting ‘on location’ (R.L.S. Junior High), a killer shoegaze soundtrack (especially the last track) and a cameo by director Peter Bogdanovich himself (as the principal).
Lick the Star is all about ‘teen angst’ and what it means to be a teenager. Sofia really understands the subject matter and is more than capable to transmit emotion and recreating a specific time and place. Coppola’s unique vision comes from her courage to paint a genuinely innocent, naïve and very ‘girly’ picture, that she went on exploring in her next film The Virgin Suicides. Her offbeat humor, poetic flair and fascination with the idea of celebrity, also already come to the forefront in this authentic, cute and super-sweet short film.